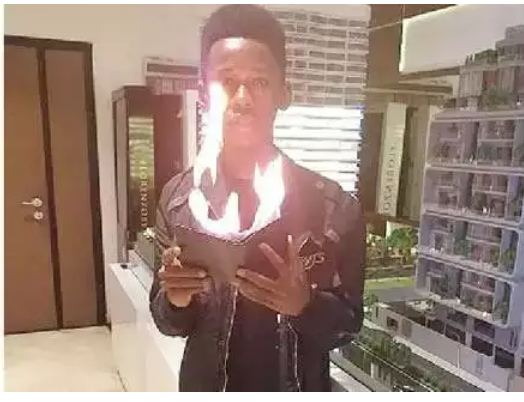 19-year-old Nigerian Magician, Babs Cardini wows audiences by performing tricks of turning objects into money on the streets of Lagos.

During an interview with BBC, Cardini disclosed that has been a fan of magic since the age of five but only started practicing at 16.

“When I was young, I loved watching magic shows on TV, so I have had a passion since then. I felt I must become a magician and eventually I became one. I’m gifted; it takes time to learn these things but I did it under two days. It also surprised me as it took some people two years to master,” he told BBC.

In his first magic experience, he asked his friend to pick a random card. He then looked into his eyes and told him the card he had picked without seeing it.

He tells the media outlet the most popular trick he is asked to perform is to turn objects into money.

“When I’m performing, many ask me if I’m using jazz, voodoo, any sort of trick, or sleight of hand. I’ve loved magic ever since I was five. But I officially started it when at 16. Everywhere I go to, I get wows. People have been contacting me, trying to be my friend and know me more,” he said.

“The way I am right now, I’m magic myself. I can just see a performance on television or anywhere and know how it was done. The, I just do it and add it to my list of tricks and stuff. Me and magic, we’re like 5 and 6. It’s kind of self-taught and gifted. At the same time, it’s more practice.”

One of the few places he said he gets inspiration from magic shows on Youtube. He said when he sees a performance that he likes, he adds it to his tricks-set.

“I go on YouTube to look at people who are greater at magic and see what they do. It’s not like I watch tutorials because, if you’re watching tutorials on YouTube, you don’t get to go far. I don’t like being optimistic but, in the next there years, I hope to see myself as one of the greatest magicians in the world,” he said. 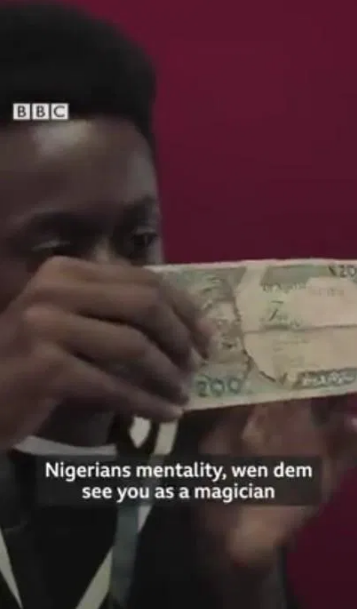 Babs lamented one of his challenges performing for Nigerians is that majority of the request he gets from them is to turn objects to money.

“I’m just a normal teenager. But one thing that makes me exceptional is magic. People didn’t really know I was a magician. Those who knew were those I liked playing with. Like, when I want to buy something, I do a trick where I turn paper into money.

“And the Nigerian mentality, once they see you as a magician, all they ask you is ‘can you turn this to money?’ Most of their requests are about money,” he said.

While stating that he has received numerous calls from both people who seek friendship and others who look to get certain tasks accomplished, the teenage magician said that anywhere he gets to, people are always wowed with his tricks. People contact him for friendship and want to know him more.

“I do it because of my passion and love for it. I never ask people for money. Do you see the way I laugh in my videos? I actually laugh at people’s reactions. Recently, it has been crazy. It was amazing to grow from having 3,000 followers on Instagram to 35,000. Just within a day, my followers increased from 18,000 to over 30,000,”he said.

Although Babs’ father had expressed doubts about him taking the art as profession, the young magician stated in another interview that he intends touring states in Nigeria and, thereafter, going international to showcase his skills on a much larger scale.

“I’m going to take this big because it’s very rare in Nigeria. They don’t really go out to perform because of the Nigerian mentality and the way people think you’re using voodoo. I’ll love to go to every state in Nigeria, making people know that I exist. From there, I’ll love to take it international,” he said.

This Nigerian magician wants to be the best in the world.🧙🏾‍♂️
19-year-old, Babs Cardini wows audiences by performing tricks on the streets of Lagos. He showed us his most popular trick – turning objects into money. pic.twitter.com/9T2uDDMw7X