Following the recent unfortunate xenophobic attacks on Nigerians in South Africa, Air Peace Airlines has volunteered to send an aircraft from Friday 6th September 2019 to evacuate Nigerians who wish to return to Nigeria free of charge.

In a letter to the Minister of Foreign Affairs, Geoffrey Onyeama, Nigeria’s biggest carrier expressed readiness to evacuate stranded Nigerians in South Africa.

The Chief Operating Officer of the airline, Mrs. Oluwatoyin Olajide, signed the letter which was dated September 4, 2019, describing the situation in a South African is unfortunate.

The Chairman of the Airline, Mr. Allen Onyema, said the gesture was in solidarity with the government of President Muhammadu Buhari.

The general public is hereby advised to inform their relatives in South Africa to take advantage of this laudable gesture.

Air Peace appealed to the Nigerian embassy in South Africa and the South African government to transport stranded Nigerians to the Airport for Air Peace to convey them home. The letter read:

“The xenophobic attacks on Nigerians in South Africa is an unfortunate event and we cannot fold our hands and watch our fellow Nigerians to be killed by South Africans.

“To this end, Air Peace is willing to support the Nigerian government’s effort in this matter by deploying our B77 aircraft immediately to South Africa to evacuate Nigerians back home

“We humbly plead with the Federal Government to please inform the Nigerian Embassy and the South African Government to rescue the stranded Nigerians by transporting them to the airport to allow Air Peace evacuate them to Nigeria.

“We would appreciate your unflinching support in this regard.”

Reacting to the proposal, the Minister of Foreign Affairs welcomed the offer and said it would be a relief to government and Nigerians in South Africa who might be stranded following increasing violence in the Southern African country. 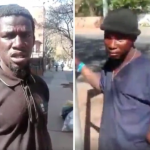