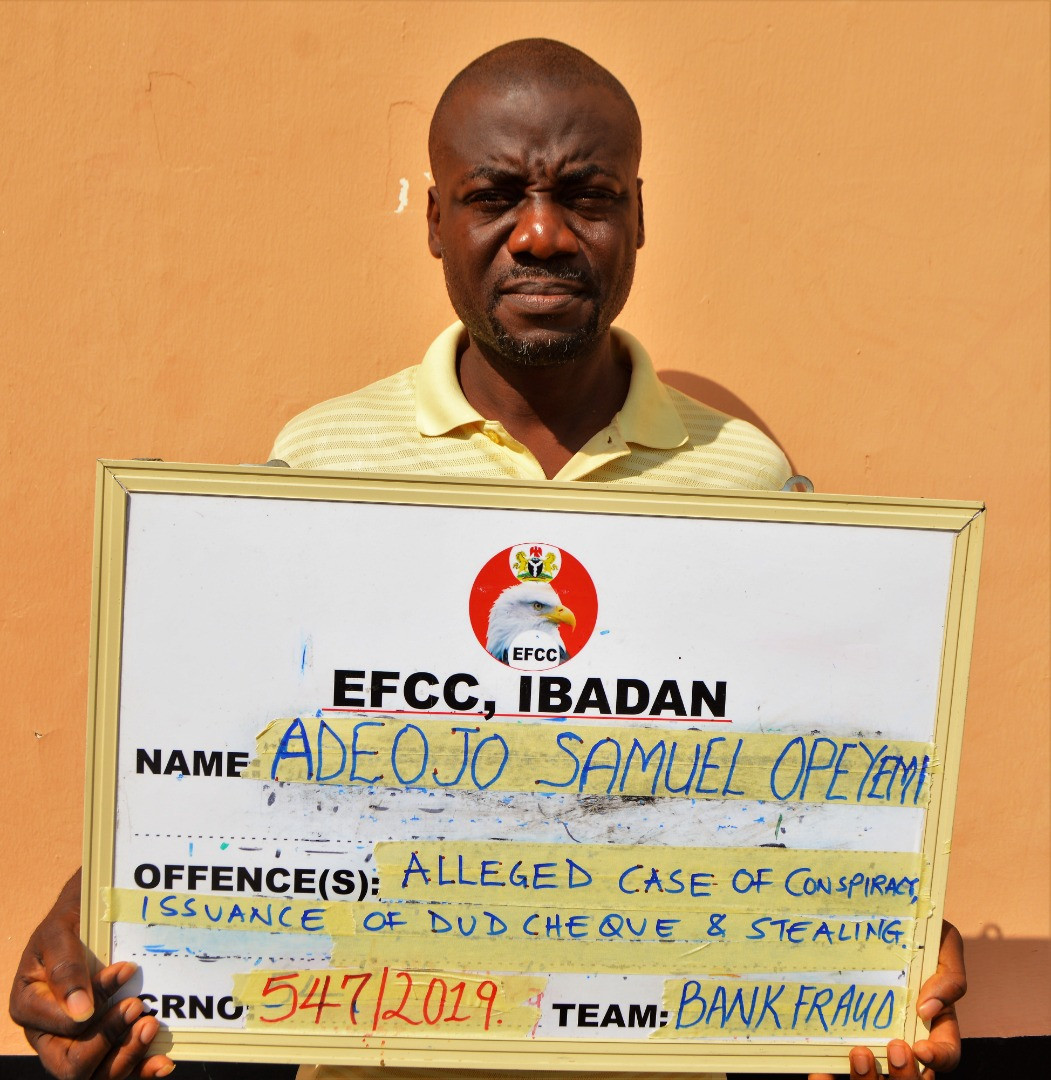 In a statement issued bu the EFCC spokeman, Wilson Uwujaren, on Tuesday, December 3, 2019, the anti-graft agency said Adeojo is a member of a syndicate “notorious for stealing vehicles from car dealers through pretense as genuine buyers”.

The statemnt reads: Mr Adeojo was fingered as the leader of a car theft syndicate notorious for stealing vehicles from car dealers through pretense as genuine buyers.

Until his arrest recently, the EFCC had been on his trail after series of petitions against his gang’s criminal activities were considered by the commission’s Ibadan zonal office.

No fewer than three cases of car theft have been established against the syndicate, with all the vehicles involved recovered and kept in the commission’s custody in Ibadan.

Investigations revealed that the gang deploys a similar pattern of tricks to steal vehicles from their victims.

According to EFCC’s findings, Mr Adeojo often pretends to be a medical doctor, adopting different names and different institutions as his place of work to appear responsible and create a false sense of confidence to penetrate the victims.

One of the many cases reported involved a Toyota Avensis wagon car in which Mr Adeojo claimed to be one Gboyega Omojola of the University College Hospital, Ibadan.

The case was reported to the EFCC, Ibadan office on March 23, 2019, by Tunde Adejuwon, an Ibadan-based car dealer.

According to the petitioner, ‘Dr. Omojola’ had come in company of one Babatunde Oni, his supposed driver, to his stand to negotiate for the car and later agreed to pay N2 million for it.

After the agreement, ‘Dr. Omojola’ issued a N2 million Skye Bank Cheque ostensibly in favour of the dealer and ordered his ‘driver’ to pay it into his Zenith Bank account at Bodija, Ibadan.

Mr Oni later came with a copy of the Zenith bank deposit teller, depicting ‘payment’ of the agreed sum into the dealer’s account.

It was, however, later discovered that the payment was not approved as the payer used a cloned cheque for the transaction.

Unfortunately, the decline did not come until after the gang had eloped with the vehicle.
A similar scenario also played out in a petition by one Amos Oloja, also an Ibadan-based car dealer.

Mr Oloja alleged that the duo drove to his car stand in an Honda CRV to price a Toyota Sienna car and agreed to pay N2.2 million.

This time, Mr Adeojo claimed to be Dr. Odumodu also of UCH, Ibadan, while Mr Oni, his ‘driver,’ gave his name as Kayode.

‘Dr. Odumodu’ issued a Standard Chartered Bank cheque for the payment of the sum and directed his ‘driver’ to go with the dealer to lodge the cheque into his account domiciled in the First Bank, Iwo Road branch.

Unfortunately, the cheque could not be confirmed as the account rather carried the name Akinjide Sefiu Odusanya.

On hearing the news, Mr Adeojo pretended to be surprised. He left with the SUV with the promises to go and bring another cheque to offset the car cost. Mr Oni was left behind.

Though, he (Oni) had pretended to be sick all the while, he took advantage of the time the dealer went to return a borrowed battery to his colleague to strike.

Before the dealer’s return, Mr Oni made away with the negotiated Avensis car.

The two were also linked with another car theft matter involving a Toyota Matrix car somewhere in Iwo, Osun State.

Mr Oni is currently in the Agodi Correctional Centre, following a court order when he was recently arraigned on one of the incidents.

Mr Adeojo will have his day in court soon.

Hate Speech Bill Is An ‘Impressive’ Piece Of Legislation In Nigeria – US Envoy, Jerry Howard