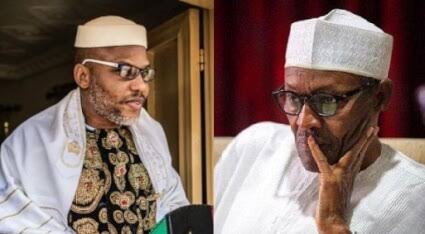 The Igbo Youth Assembly (IYA) worldwide has asked Nnamdi Kanu, the leader of Indigenous People of Biafra (IPOB), to immediately apologise for his conducts against President Muhammadu Buhari.

In a statement signed by the President-General, Ifeanyi Nwaudunna, the group described Nnamdi Kanu’s actions against Buhari’s administration as rude and irresponsible.

The group said such conducts contradicts the customs, traditions and cultural values of Igbo as a people.

“Such acts of rudeness and irresponsibleness of Nnamdi Kanu should not be passed to the younger generation because it contradicts the customs, traditions and cultural values of Igbo as a People.

“As such, with immediate effect, IYA Worldwide mandates Nnamdi Kanu to apologise to President Muhammadu Buhari and have his peace at Afara-Ukwu Umuhia Abia State.

“IYA Worldwide maintains that President Buhari’s administration has recorded so much transformation in the areas of infrastructure and road construction such as, Enugu – Port Harcourt Express Way, Lagos – Ibadan Express way, Air ports re-construction across the country, the Second Niger Bridge and the laudable fight against corruption and insurgency in the country,” the statement reads.