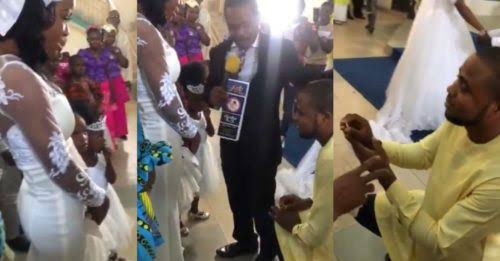 What was meant to be an atmosphere of joy and romance, quickly turned sour when a pastor denied a man the opportunity of proposing to his girlfriend during a wedding event in the church.

Apparently, the young man has been dating his pastor’s daughter for some time now and finally decided to propose to her in an ongoing wedding ceremony that sees the girlfriend as one of the bridesmaid.

In the church filled with members, the young man knelt down to propose to his lover who was adorned in a white gown, only to be stopped by the pastor who also doubles as the girl’s father.

The pastor insisted that the boyfriend was supposed to come see him before proposing to his daughter because he was not aware of the relationship.

“Don’t do that, don’t that, she’s my daughter, sorry, I am not aware of the relationship, I am not embarrassing you if you have interest in my daughter, come and see me” the pastor said.