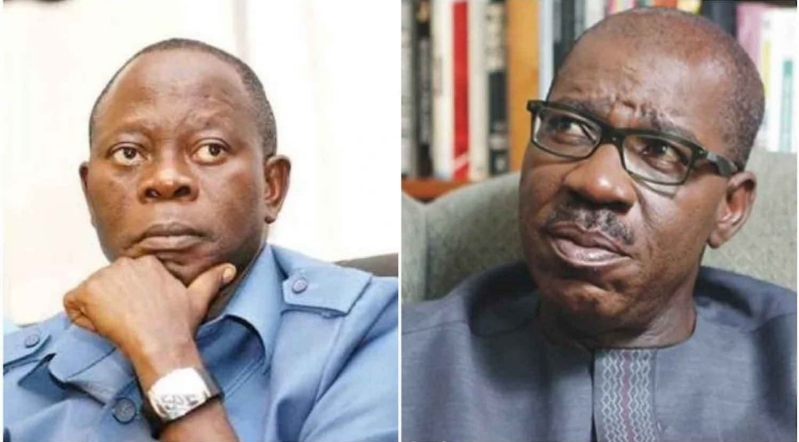 Fourteen members-elect of the Edo State House of Assembly, elected under the platform of the All Progressives Congress (APC) have accused the State Governor, Godwin Obaseki, of allegedly hiring assassins to kill the National Chairman of the party, Comrade Adams Oshiomhole.

KanyiDaily recalls that Governor Obaseki had threatened to deal “ruthlessly” with Oshiomhole if he “does not behave.”

Reacting to the threat while addressing a news conference Thursday in Abuja, the 14 lawmakers urged President Muhammadu Buhari, party leaders and the Inspector General of Police IGP, Muhammed Adamu to call Obaseki to order.

The 14 Lawmakers-elect said that should anything untoward happen to any party chieftain or faithful in the state, the people would never forgive their inaction.

The lawmakers said; “We the members-elect of the Edo state House of Assembly this day 30th day of January 2020, intend to use this medium to express our worries about the happenings in Edo State APC and the seeming aloofness of some of our leaders which has created another Emperor in Edo State, in the person of Governor Godwin Obaseki.

“We want to draw the attention of our President, Muhammadu Buhari, the National leader of our Party, Asiwaju Bola Tinubu, the National Working Committee of our Party, the All Progressives Congress (APC), Party leaders and members across the country and indeed all Nigerians to the continuous insults and threat to the life of our National Chairman, Comrade Adams Aliyu Oshiomhole and other party members in Edo state.

“Two days ago, precisely 28th January 2020, Governor Obaseki was on record which was widely circulated on social media and mainstream media, threatening the National Chairman of our Party, Comrade Adams Aliu Oshiomhole.

“It would be recalled that we had persistently drawn the attention of the world to the series of attacks on members of our great party, the All Progressive Congress (APC) across the state on different occasions just because they bear opposing views from that of Governor Godwin Obaseki and the government of the day in Edo. The homes of most leaders of the APC in Edo State have been marked for demolition by governor Obaseki.

“Several petitions were written to the Inspector General of Police from 18th June 2019 after the attack on us at Golden Tulip hotel in Benin City, but nobody has been held responsible for that attack yet.

“We want to believe that because the leaders of our Party across the country have been quiet to call Governor Godwin Obaseki to order, he has been further emboldened to kill everybody due to his desperate ambition for a second term.

“He has recruited a killer squad in Edo State and their mandate is to kill Comrade Oshiomhole and other APC leaders. So he has continued to create a crisis and disrupt public peace.

“We demand that President Mahammadu Buhari, the National leader of the party, Senator Ahmed Bola Tinubu, the governors of the APC governed states call Governor Godwin Obaseki to order as he is known to have set several precedents in our Party that may be detrimental to our great party in the nearest future.

“The Inspector-General of Police should wake up to his responsibility of protecting lives, properties and maintaining public peace in Edo state by standing against infringement on the rights of Edo people. We beg him to advise the Edo CP to be professional in his duty.

“We cannot allow Obaseki to destroy Edo APC because he does not know the sacrifices made by Oshiomhole to keep that party in Edo State. It is clear that Obaseki is heading to another party flowing from the endorsement he has received from PDP leaders including the Governor of Ebonyi State.

“But we are not worried because this same Governor lost his polling unit, ward, LGA and senatorial district to PDP during the Presidential election, so he has no political clout.

“He went to play golf shortly after casting his vote not bothering whether President Buhari won the election or not. But the National Chairman of APC won his entire area for President Buhari. So we appeal to our leaders to call Obaseki to order, he has no monopoly of violence. And if any of our people is killed, we will hold Obaseki and the IGP accountable. Edo people will never forgive them.”

ALSO READ: “I Will Show You That Mosquito Can Cause Malaria, And Kill” – Governor Obaseki Threatens Adams Oshiomhole

3000 PDP Members Including Chairman Defects To APC In Zamfara State