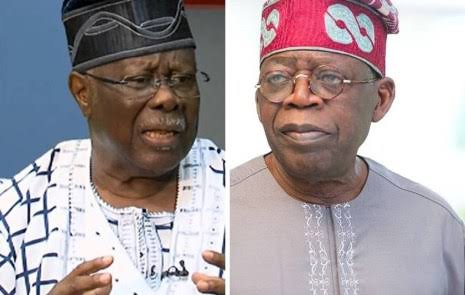 A former Deputy National Chairman of the Peoples Democratic Party, Bode George has expressed desire to challenge the National Leader of the All Progressives Congress (APC), Asiwaju Bola Tinubu, in the next presidential election.

Bode George made this revelation during an interview with PUNCH, where he also vowed to disown Nigeria for Togo or any other country if Tinubu beat him to it.

He said: “It is a challenge. It would be the most illogical and most disruptive issue to have him (Tinubu) elected as President. If this happens, I will disown Nigeria to take the citizenship of Togo or any other country.

“Look, what this fellow did in my state, all the lies and the most painful thing was that on the day of the election (2019 election) two bullion vans drove in the daylight to his house and what did Prof Itse Sagay say, that he (Tinubu) had been a very wealthy man before. Where was he wealthy? If his (Sagay’s) conclusion was that, then something is wrong. Let us call a spade a spade and stop deceiving ourselves. So, if that is the way they want to do it, then I am ready to face him (Tinubu).

“Let us get out there because it would be the greatest disservice for our nation to have him contest as a presidential candidate.”

Meanwhile, Arewa Youths has vowed to use all legal means to stop Tinubu from becoming the president of Nigeria in 2023.

The group said that it will never support Tinubu’s lofty ambition because already the southwest is enjoying enviable appointments from the federal government.