President Muhammadu Buhari has written a letter to the National Assembly, demanding for the replacement of late Tobias Chukwuemeka Okwuru whom he appointed in error as member of the Federal Character Commission (FCC).

KanyiDaily recalls that President Buhari had on Tuesday, April 28, 2020, appointed late Okwuru into the FCC board even when it was clear that he died on February 28, 2020.

Late Chief Okwuru before his death at the age of 59, represented Ezza south/Ikwo federal constituency, in Ebonyi state.

However, President Buhari made a U-turn on Tuesday, asking the senate to replace the deceased nominee.

Below is part of the letter read in the hallowed chamber:

“In compliance with the Provision of Section 156(1) of the Federal Republic of Nigeria 1999 as amended, I write to request for confirmation by the Senate, the appointment of the following four nominees as members of the Federal Character Commission as replacement of my earlier submission for Delta, Ebonyi, Lagos and Nasarawa States”.

Meanwhile, KanyiDaily had also reported how CJN Tanko Muhammad appointed over 10 ‘dead and retired’ judges as members of election tribunal. 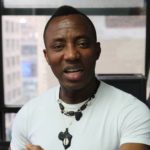