The National Assembly have asked the President Muhammadu Buhari to remove the Minister of State for Labour, Employment and Productivity, Festus Keyamo, from supervising the recruitment of 774,000 Nigerians for Federal Government’s Special Public Works. 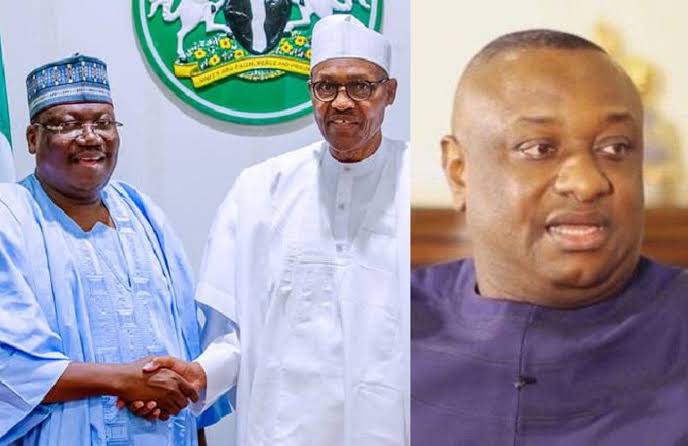 KanyiDaily recalls that Keyamo had engaged in a brawl with the lawmakers when he was summoned to defend the programme.

After a heated argument, Keyamo accused the lawmakers of trying to hijack the programme by getting undue slots in the recruitment process.

The NASS members have now asked Keyamo to recuse himself from implementing the 774,000 special works programme of the Federal Government.

READ:  OMG! See What a Jealous Wife Did to Her Husband for Cheating on her [GRAPHIC PHOTO]

Both the Senate and the House of reps on Tuesday at their separate plenaries, said the National Directorate of Employment should take over the exercise, while the Minister of Labour, Employment and Productivity, Senator Chris Ngige, should surpervise in line with the NDE Act.

The Chairman, Senate Committee on Judiciary, Human Rights and Legal Matters, Opeyemi Bamidele, brought the motion through a point of order, to the red chamber.

He said Keyamo erred in law by taking over an assignment which was constitutionally assigned to the NDE through the Revised 2020 Appropriation Act.

He said the federal parliament approved the sum of N52bn for the NDE to execute the exercise, but lamented that the labour ministry, through Keyamo, had hijacked it.

“While recognising the supervisory role of the labour ministry, the Senate notes the need for it in respect of this programme.

“We will hold the NDE responsible both for the implementation of the programme and surrendering of accounts for money appropriated by the programme by the National Assembly.

“The revised Appropriation Act is a law binding on all arms of governments,” Bamidele said.

The Senate subsequently resolved that the NDE should take full charge of the implementation, while the ministry would play a supervisory role.

The Senate President, Ahmad Lawan, said the NDE remained the agency recognised to implement the programme, adding that the Senate will perform its roles by monitoring its implementation very closely.

Spokesperson for the Senate, Ajibola Basiru, said the Appropriation Act should be obeyed. He said:

“The Appropriation Act, in making provision for N52bn for the public works, specifically puts it under NDE. There is a world of difference between an agency and a ministerial body.

“NDE, to whom the budget was assigned to by law, is not just a draft apartment of government, it was set up to have perpetual succession and corporate existence.

“What that is saying is that the NDE is not a sine qua non to the Ministry of Employment and Productivity and they are not at a par.

“What Senate is insisting is that it is not by accident that the budget was domiciled in the NDE and not the main ministry.

“In carrying out the budget, in order not to breach the law, the executive must comply with the terms of this.”

The spokesperson added that since Buhari had intervened, “we are not insisting on the suspension of the programme, but we are insisting that the legality and the constitutionality of the programme must be followed to the letter.”

At the House of reps, the lawmakers made their demand following a motion moved by the Deputy Minority Leader, Toby Okechukwu; and Nnolim Nnaji, titled, ‘The Need to Uphold the National Directorate of Employment Act in the Implementation of the Special Public Works Programme.’

Adopting the motion, the House “urges Mr President to direct the Minister of Labour recognised by the Constitution and the NDE Act, to live up to his lawful responsibility of supervising the NDE, ensuring non-interference and meddlesomeness by any persons in the running of the agency.”

The House also urged the Ministry of Finance “not to release any funds for the implementation of the special public works programme if it would breach the due process, Appropriation Act 2020 (as amended) as well as the NDE Act.”

Moving the motion, Okechukwu noted that Section 2 of the NDE Act unambiguously vests in the agency the responsibility to, among other key aims and objectives, design and implement programmes to combat mass unemployment.

The lawmaker also noted that the Appropriation Act 2020 was clear that the NDE was the implementing agency for the SPW programme and captured it as “Public Works Programme (1000 Persons Per LGA for 36 States and Area Councils of FCT – 774,000 persons” for the sum of N52bn.

Okechukwu said since the executive proposed the programme, “it could have clearly named the Ministry of Labour, not the NDE, as the implementing authority in the 2020 budget if it so wished.”

Okechukwu said, “The House is determined to prevent any mischief, wastage of scarce public resources, lack of accountability and defeat of the aims and objectives of the Special Public Works programme.”

KanyiDaily recalls that President Buhari had, a few months ago, approved the employment of 774,000 Nigerians to cushion the effect of the economic hardship caused by COVID-19.

By the arrangement, 1,000 Nigerians, who will earn N20,000 each on a monthly basis for three months, are expected to be recruited in each of the 774 local government areas of the country. The programme will start in October this year.

READ:  46-Year-Old Pastor Dies While Fasting For 40 Days And Nights Inside A Bush In Imo State

Yobe Headmaster Arrested For Rαping 10-Year-Old Pupil, Claims They Had Sεx With Her Consent