Members of the Joint National Assembly Committee on Labour on Tuesday engaged in a shouting march with the Minister of State for Employment, Labour and Productivity, Mr Festus Keyamo, over the modalities for the recruitment of 774,000 Nigerians under National Directorate of Employment (NDE) scheme.

The NDE scheme was created to employ 1,000 unskilled persons per local government area on a short term engagement for a period of three months. Those employed would be paid a stipend of N20,000 monthly.

Trouble stared on Tuesday when the Director General of the NDE, Mr. Nasiru Ladan, could not defend the N52 billion budgeted for the recruitment of 774,000 Nigerians under the NDE at an interactive session with the National Assembly joint committee chaired by Senator Godiya Akwashiki.

In an attempt to shed more light on the programme, the minister thereafter told the committee that his ministry was specifically asked not to share details of the NDE recruitments by President Muhammadu Buhari.

However, the lawmakers insisted that Keyamo must carry them along. The Minister said he was invited for public hearing and not closed door meeting, adding that he will not say anything unless there is media presence.

The lawmakers took exception to the submission of Keyamo and emphasised on the legislative body’s oversight functions over the the recruitment which resulted in a shouting spree between the committee members and the junior minister.

While briefing the newsmen after he was walked out the Committee Room, Keyamo accused the lawmakers of planning to hijack the process of recruitment. He said:

“I said you can’t direct me how to do that because that is taking over the power of the President (Muhammadu Buhari). You can’t accuse me of lopsidedness issue publicly and close the door.”

“I did not insult them. I only insisted that we should do it publicly. They want to direct me on how to do it. They can’t direct me.”

Subscribe to Kanyi TV
READ:  "God Is Angry With APC For Looking The Other Way While Nigerians Are Being Killed" - Fayose 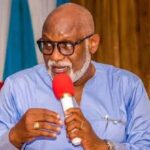