Popular journalist, Kemi Olunloyo has sparked controversy on social media over her claims that Igbo girls are the least educated in Nigeria.

Olunloyo, who made this claim on her Twitter, also stated that Igbo girls display the mentality of housegirls and street prostitutes.

Blaming their female icons for not empowering their women, the journalist stated that the likes of blogger, Blessing Okoro who was caught flaunting another man’s house as hers, are working towards changing the ‘igbo women’ narrative.

“Igbo girls are the least educated in Nigeria. The HOUSEGIRL and street prostitute mentality is still there.

“Igbo female icons don’t empower their women enuff. Once they reach the top, they forget the girls in the village. People like Blessing Okoro are changing that”, she tweeted. 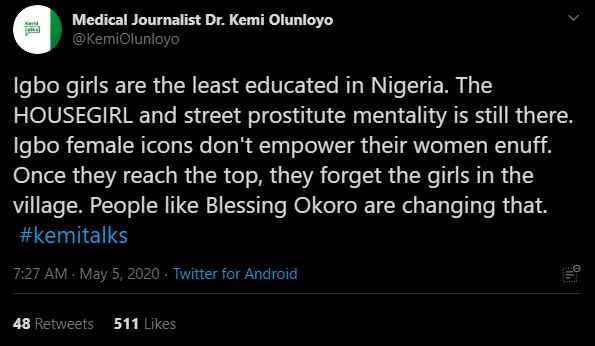 Why are Igbo women online so weak? A strong Nigerian woman tells you how you can improve your lives out of maids and hookers, u flagged my post and @Facebook banned me for 30 days, then I went after Zuck, the ban reduced to 3 days. See you Friday. U may never progress in life. pic.twitter.com/pL7HkfCUEn

KanyiDaily recalls that a Kenyan Businesswoman, Gesare Chife had shared her experience with Igbo women, after her first visit to the eastern part of Nigeria.

On her social media page, Chife said Igbo women are force of nature because they’re very strong and powerful. 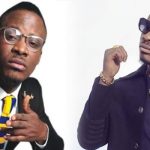