A former Governor of Ekiti State, Ayodele Fayose has described the crisis being faced by the All Progressives Congress (APC) as a show of God’s anger against the ruling party. 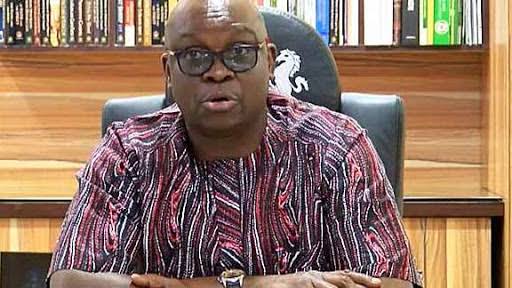 KanyiDaily had reported how the APC has been engulfed in a crisis over its primary election in Edo state and the suspension of it’s National Chairman, Adams Oshiomhole, by the Appeal Court.

In a series of tweet on Thursday, Fayose said God is angry with the APC for its role in impoverishing Nigerians, promotingg election rigging and looking the other way while Nigerians are being killed in their thousands.

The former governor said the crises will become worse for the party until it collapses. He said the APC’s collapse will pave way for Nigeria to return to the path of peace and progress.

“The crisis being faced by APC is a show of God’s anger against the party for its role and that of its govt in impoverising Nigerians, promoting election rigging and looking the other way while Nigerians are being killed in their thousands,” the tweet read.

“God will never be happy with a party that its govt is doing nothing to stop the bloodshed, raping of women; including children and destruction of people’s sources of livelihood going on in the country.

“God can also not be happy with a party like APC, that its govt has not only impoverished Nigerians, but with its inept presidency, plunged the country into debt that future generations will have to pay.

“Will God be happy with APC after seeing how elections were rigged since 2015, the latest being in Kogi and Bayelsa States?

“Definitely, their matters will be made worse with time because for Nigeria and its people to return to the path of peace and progress, the APC house of lies that is being nurtured with the blood of Nigerians must collapse.”

This is coming barely one week after Fayose said that democracy would only return to the country when President Muhammadu Buhari leaves office.

Police Demands N200,000 From Woman Whose Land Was Forcefully Taken By Ex-Senate President