Series of videos have emerged online showing a large group of people dancing and vibing to Burna Boy’s hit song, Ye, during a Black Lives Matter protest in the United States, United Kingdom and Germany.

The protests was triggered following the death of a black man, George Floyd, killed by a white police officer, Derek Chauvin, who knelt down on his neck despite his pleas about not being able to breathe.

Angry demonstrators from across the world have since been protesting against police violence on black citizens, and for justice to be duly served to the four former officers involved in killing 46-year-old George Floyd.

In series of the protest video, some demonstrators in US, UK and Germany were spotted singing Burna Boy’s “Ye” while walking on the streets with placards that read “Black Lives Matter.“

KanyiDaily recalls that Burna Boy was nominated at 2020 Grammy Award for the Best Contemporary World Music Album, but he lost the award to Beninese legendary singer, Angelique Kidjo. 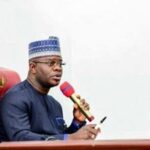 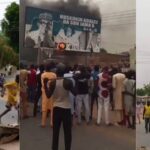