A 10-year-old boy identified as Jibril Aliyu have been rescued by some human rights activists after he was locked up for two years with animals by his two stepmothers in Badariya area of Birnin Kebbi Local Government Area in Kebbi State. 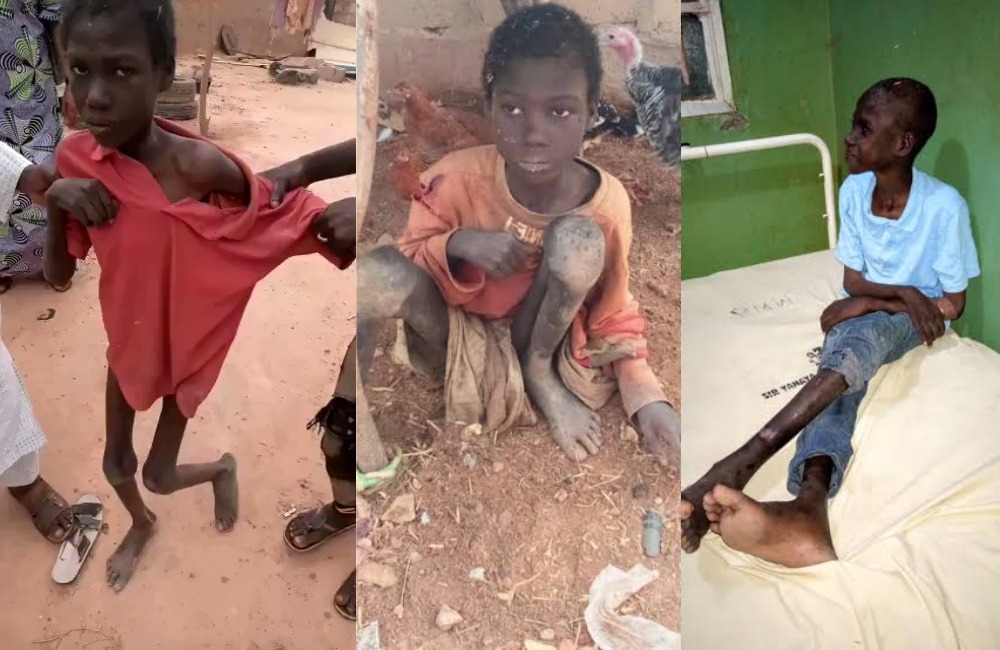 Jibrin Aliyu was said to have lost his biological mother two years ago, therefore fell under the custody of his biological father, Malam Aliyu and his two step mothers.

He was allegedly subjected to inhuman treatment by his step-mother. Due to lack of food, Jibril was forced to feed on the remnant food of the animals he was tied with and even ate his excreta until he was rescued by some human right activists.

When newsmen visited the house of Jibrin on Monday in Badariya, they met him chained at an animal stall looking helpless and lame.

All efforts by Journalists to speak with him proved abortive as he could not speak out due to the inhumane treatment he was subjected to. He entirely lost his sense of reasoning and now behaves like an animal.

It was gathered that there are some villagers who were saying, Jibrin was having a lunatic tight from his childishness up to time he was chained by his step mother.

Already police have arrested the Jibtin’s Father, Malam Aliyu and two of his wives for the cruel and monstrous treatment melted on the boy.

Police Public Relations Officer, PPRO, Nafi’u Abubakar, who confirmed the arrest told Journalists that police were investigating the matter while the four culprits are under police custody.

His mother died 2 years ago. He was denied shelter, clothing, food, not to talk of health care. pic.twitter.com/n7sJ5TH1zS

As a result of monstrous and nefarious treatment he was subjected to, he entire lost his senses and behaves exactly like an animal. pic.twitter.com/ebvhFl9TsJ

His 2 evil step mothers, together with his father are currently in police custody. While the 10 year old Jibril is undergoing treatment and rehabilitation at the Federal Medical Center Birnin Kebbi. What happened to Jibril is the highest level of barbarity and extreme cruelty.

I pray that the villainous culprits will pay dearly for their atrocity!

KanyiDaily had also reported how a middle-aged woman identified as Mrs Ngozi Chukwuani was rescued after she was chained to a pillar by her husband, Uche Chukwuani, in Ebonyi State.