Nigerian billionaire, Femi Otedola and his four children are seen in a new video having a fun-filled Sunday as they partied and danced together at home.

In the viral video, the oil magnate could be seen dancing with his three daughters – DJ Cuppy, Tolani and Temi – and his son Fewa while music played in the background. He was giving his children some dance steps as they grooved to different indigenous music

Mr. Otedola is known for always put his family first in everything he does as he is usually seen spending quality time with his children.

Sharing one of the clips on her Instagram Stories on Sunday, DJ Cuppy wrote: “Your family could never.”


READ ALSO
Bride With The Longest Veil; It's 3km-long

Femi Otedola and his children party at home on Sunday, September 20.

This is coming few days after Mr. Otedola purchased Ferrari Portofino cars which reportedly costs about $215,000 (N83.2 million), for each of his three daughters. 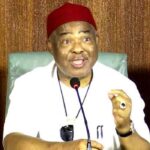