A 38-year-old pastor, Idowu Samson, has been arraigned before an Iseyin Chief Magistrate’s Court for allegedly defiling a nine-year-old girl. 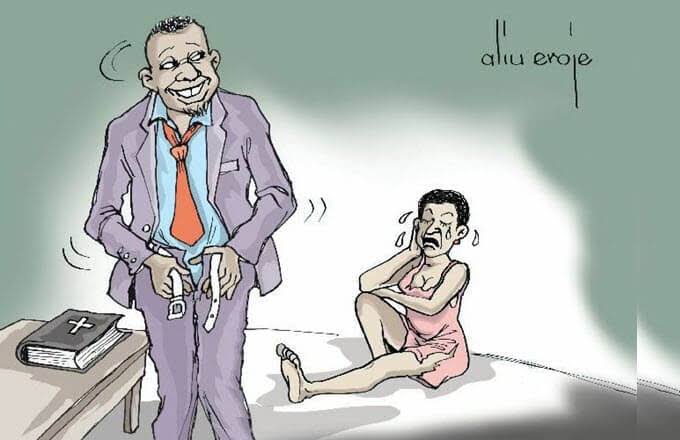 The pastor was alleged to have inserted his finger into the private part of the victim with the claims that he wanted to cast out demons in her, before he finally defiled and had carnal knowledge of the young girl in the church.

The Prosecutor, Inspector Shaib Shedrack, told the court that the defendant, who operates a church in the metropolis, committed the crime on August 19, 2020.

Shedrack said the offence was contrary to and punishable under Section 210 (A) Cap C38, Laws of the Federation 2004.

READ:  Husband locked wife in garden shed because she kept singing 'ding dong the witch is dead' after his mother died

“He inserted his finger into the private part of the victim with the claims that he wanted to cast out demons in her. He defiled and had carnal knowledge of the young girl before people could notice or get to the church.

“He lied to the parents of the young girl that he would help in washing her off the devil and demons and asked them to go home before he committed the offence”, NAN quoted the police officer as saying.

The defendant pleaded not guilty to the two count-charges of defilements and impersonation. His defence counsel, Mr Ade Bamgbose, pleaded for bail for his client in a liberal term.

READ:  Boko Haram: 12-Year-Old Female Suicide Bomber Blow Up Herself And 3 Other Boys In Borno

Meanwhile, the Chief Magistrate, Maaruff Mudashiru, ordered that the accused person be remanded in prison custody pending the ruling on the bail application.

The case has since been adjourned till October 12 by the Magistrate for ruling on the bail application and hearing on the matter.

KanyiDaily had also reported that Pastor Peter Alatake was dragged to Court for allegedly raping a 16-year-old secondary school girl suffering from epilepsy during a ‘deliverance’ session in his church.

READ:  President Buhari’s New Year Speech Shows He Has Given Up On Nigeria - PDP