Osun State Governor, Gboyega Oyetola has asked the Election Petition Tribunal in Osogbo to nullify the outcome of the Osun governorship election. 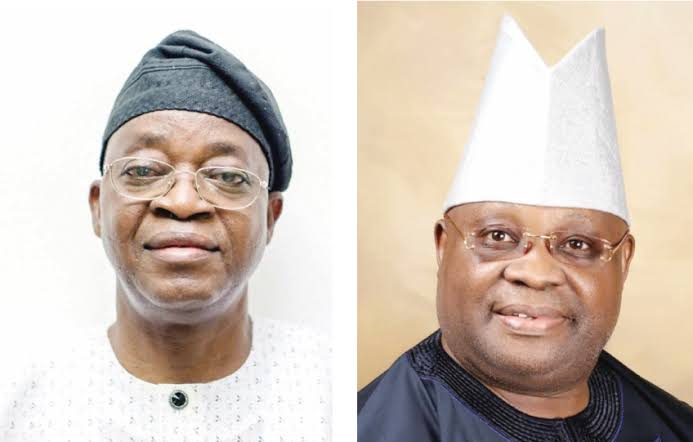 KanyiDaily had reported how the governorship candidate of the Peoples Democratic Party (PDP) Ademola Adeleke was declared the winner of the Osun election on Sunday morning, July 17, 2020.

Adeleke secured 403,371 votes to defeat his closest challenger, Governor Oyetola who polled 375,027 votes on the All Progressives Congress (APC) platform.

In a petition dated August 5, Oyetola is asking the court to nullify Adeleke’s election because he was not qualified to contest and that he was not elected by majority of the lawful votes cast.

In the suit, Oyetola is the first petitioner while the APC is the second petitioner. The Independent National Electoral Commission (INEC), Adeleke and the PDP are first, second and third respondents respectively.

Oyetola said the second respondent forged the certificates submitted to INEC and did not comply with the provisions of the Electoral Act, 2022.

“The Petitioners hereby plead and shall rely on Form EC8D (being the summary of collation of results) and Form EC8E (being the declaration of result) issued by the 1st Respondent, not only to show the recorded scores but also to demonstrate the invalidity of the scores recorded thereon,” the petition reads.

“The Petitioners plead and shall also rely on the Reports and evidence by their Experts, including Statisticians, Forensic Examiners and other witnesses, as well as the Report of Inspection and Production of Materials granted to the Petitioners by this Honourable Tribunal.

“The Petitioners contend that the 2nd Respondent was, at the material time, not qualified to contest election to the office of the Governor of Osun State for having presented forged certificates to the 1st Respondent. The Petitioners say that the Diploma Certificate of Penn Foster High School purportedly awarded on the 16th day of July, 2021 and submitted by the 2nd Respondent along with his Form EC9 to the 1st Respondent, was forged.

“The Petitioners say that in an attempt to meet the educational qualification requirement to contest the governorship election in Osun State scheduled for the 16th day of July, 2022, The 2nd Respondent submitted to the 1st Respondent a Form EC 9 – Affidavit in Support of Personal Particulars – whereof in Column C which required him to state the schools he attended beginning with Primary School and educational qualifications with dates, he indicated that he attended Muslim Grammar Sch. Ede between 1976 – 1981 without stating what qualification he obtained, if any, from that School.

The petition is signed by over 30 lawyers, including senior advocates of Nigeria.

Meanwhile, Ademola Adeleke has expressed readiness to lead the people of Osun with the fear of God, promising not to disappoint them.

READ:  To Be Better Leaders, All Nigerian Politicians Should Spend One Or Two Days In Prison - Suswam