Eight more youths protesting against the extrajudicial activities of the Special Anti-Robbery Squad (SARS), has allegedly been shot dead by the police in Ogbomosho, Oyo State. 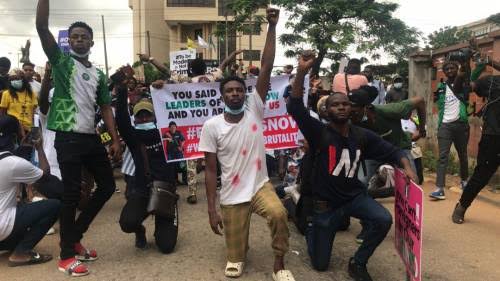 It was gathered that the youths in Ogbomoso had mobilized themselves on Sunday to protest the killing of a young man, Jimoh Isiaq, who was shot on Saturday during #EndSARS protest at the Owode police station.

Their starting point was reportedly at Isale ora where they started burning tires to create awareness. They then proceeded to Owode police station where they challenged again the policemen.

During the fracas with the police, two more youth were reportedly shot dead in the morning, while six more were killed including a 10-year-old boy as the unrest continued in the afternoon.

Watch the video below and see what people are saying about the incident:

Another innocent youth has been killed in Ogbomoso by the police and I am even hearing he’s not the only one dead. Will you people watch until Ogbomoso begin to burn? RT and tag who needs to see please I beg you all 💔😢😡 @seyiamakinde @PoliceNG pic.twitter.com/KRa4r9pOoJ

Ogbomoso is about to turn bloody, they’ve pursued king from his palace.
Meanwhile, 8 victims shot dead including a 10year old boy in Ogbomosho. 😭💔

Do you know currently 8 people are down in Ogbomosho from sporadic shooting by police officers. You still think they disbanded anything #EndSars is still our call

8 people were k!!led today in ogbomoso

8 yoots including teenagers were k!lled in ogbomoso today by the NPF

The world is watching, I saw the video, they shot and dragged their bodies into a van.

The IGP & His boys must answer for their crimes against humanity. #EndSARS

We are in big trouble in this country. #EndSARS

What's happening in Ogbomosho right now is scary, Jimoh Isiaq was killed by the Police yesterday, about 3 protesters confirmed dead in Ogbomoso today.
Under Buhari's watch, Nigerian Police are killing Nigerians that are protesting peaceful against brutality. #EndSARS #EndSarsNow

people dead in ogbomoso and it wasn’t sars, its our regular police, we’re fighting the whole system rn, these ak47s should be taken from them and replaced with Tasers going forward, cos we not armed, how tf are they shooting at us????!!!

The @PoliceNG has declared a war on protesters in Ogbomoso. Their boldness is off @MBuhari ‘s posturing. The president’s silence is all the go-ahead these tyrants need to unleash terror on harmless citizens #ENDSARS #EndPoliceBrutality

The videos was shot on Sunday afternoon, barely hours after the inspector-general of police, Mohammed Adamu, announced the immediate disbandment of the SARS police unit following nationwide protests over its brutality.

READ:  Ahead Of Presidential Election, Atiku And Buhari Arrive ICC To Sign Second Peace Accord [Photos] 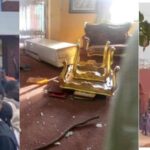