Arewa Youth Forum (AYF) has called on Kogi State Governor, Yahaya Bello, to run for the Presidency in 2023, stating that it was time for the youth to take over the country’s leadership. 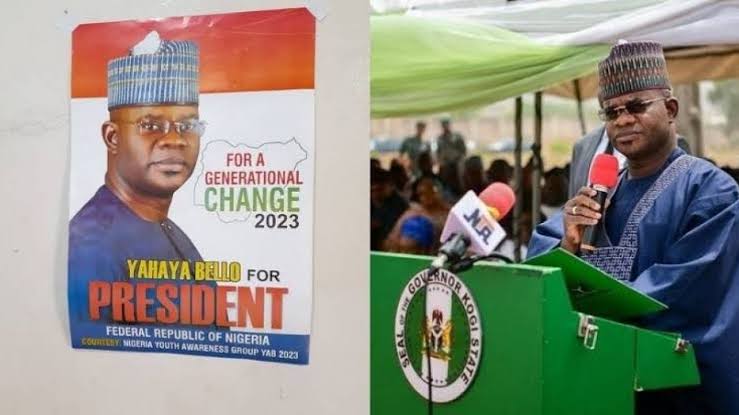 The forum made the call on Saturday during a courtesy visit on Bello at the Government House in Lokoja, according to the Chief Press Secretary to the Kogi Governor, Onogwu Muhammed.

In a statement made available to the News Agency of Nigeria (NAN) on Sunday in Abuja, AYF President, Comrade Gambo Gunjungu said the youth were tired of “recycled leaders”.

Gunjungu said that the group “after thorough research and evidence of the numerous antecedents” of Bello decided to call on him to run for President in 2023.

The youth leaders said Bello had made remarkable achievements in the areas of security, infrastructure, youth and women inclusion in governance, as well as his firmness against the politicisation of the COVID-19 pandemic.

“Like many other young Nigerians wanting to change the narratives of political bandwagon and recycled politicians, we are looking up to him as the hope of the Nigerian youth.

“We are discussing with our patrons and we already have the network it would take to propagate their message all over the nation,” Gunjungu said.

In his response, Governo. Bello called on Nigerians to continuously support the administration of President Muhammadu Buhari.

Bello said that Buhari was doing his best to proffer solutions to the different challenges the country was faced with.

Reacting to the call to run for Presidency in 2023, Bello said the discussions and events ahead of 2023 elections were in the hands of God to decide.

“The recent call on Nigerians, particularly the youth, to revalidate and register as members of the APC was an affirmation of the president’s good intentions,” he said.

The governor said that despite the numerous challenges which his administration faced at inception, it has in five years changed the negative story of the state.

Bello said the story of the state has been changed to that of unity and integration, infrastructural development, enhancing security, institutional reforms and other areas.

He said the achievements were due to honesty, resilience and tenacity of his administration in doing what is right.

He urged the AYF to encourage Nigerian youths to participate in the ongoing registration and revalidation exercise of the APC.

KanyiDaily recalls that Kogi State House of Assembly had also endorsed Yahaya Bello for either president or vice-president in 2023, in view of his outstanding performances as their state governor.

READ:  APC Kicks Against BVAS, Says Nigeria Is Not Ready For Electronic Transmission Of Results