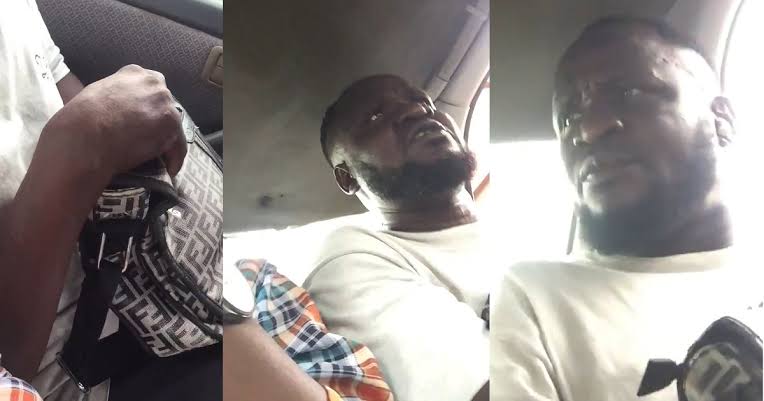 She started recording him and later called him out, saying: “You know you can stop what you’re doing and do it when you get home, you hear?”

When the man realized he had been caught, he quickly removed his hand from his pants and replied the woman saying: “My body is my body. If I’m even doing anything, it’s none of your business.”

This led to a verbal and the man hit her with his elbow and threatened to slap her, but a was stoped by male passenger who intervened in the situation.

READ:  Man Catches His Wife With Another Man After Claiming She Was Travelling With Her Sister [Video]

Watch the video and read the full post below:

After calling him out! He stopped. And I Ignored him for the rest of the trip till he started looking into my phone while i was texting, which made me really uncomfortable!

Then I told him He shouldn’t look at me or my phone and that was where the problem started. pic.twitter.com/eSbu7xOW0q

That was where Baba grabbed my wrist and was ready to beat the daylight out of me! Thank God for the people that saved me sha! I wished they would have spoken up though…

Maybe I wouldn’t have been beaten if One of those men stood up to him pic.twitter.com/hpCzlP2qzu

KanyiDaily had also reported how a female soldier was caught on camera assaulting a physically challenged man for scolding her son who wanted to cross Ibadan expressway alone.