Nobel Laureate, Professor Wole Soyinka has warned Amotekun operatives not to abuse their uniforms and trample on people’s rights to avoid being struck by Ogun, the Yoruba god of iron. 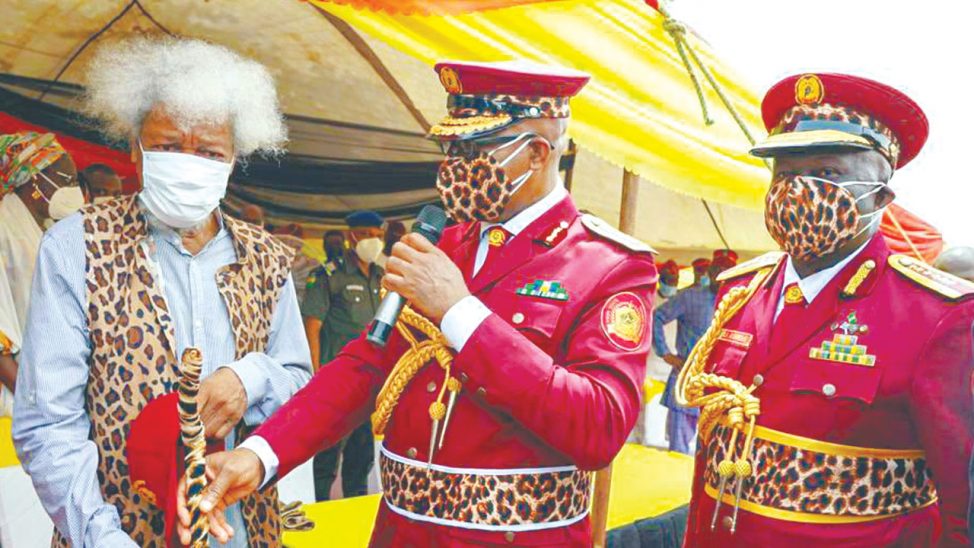 Soyinka gave this warning on Thursday during the inauguration of the Amotekun security outfit held at the Arcade Ground, Oke Mosan, Abeokuta.

He warned to the newly inaugurated Amotekun corps against abuse of uniforms, threatening that “before Ogun strikes you, we would have dealt with you.”

Professor Soyinka also warned “the Amotekun people, saying “what we need to contribute to this initiative is monitoring, advice, designs.

“You have been created to assist them, to protect them, to be part of them, to live inside them, to gather information, to say to the police, the military, we cannot handle this, but we have seen this, would like to take a look and assist?

“You are not here because you now have a uniform to start behaving like some other security agencies. You have to set an example to say that you are a civic unit.

“So Amotekun, we are watching you, if you abuse your uniform, before Ogun strikes you, we would have dealt with you”. Soyinka who was decorated as the Super Marshall of Amotekun Corps stated.

Soyinka urged the police and other security agencies not to see Amotekun operatives as rivals or competitors, but partners in combating insecurity in the state.

He said the Police are too jealous of their position that was why they seem to be negating the formation of the security outfit.

READ:  Why Buhari, APC Are Worried That Atiku Will Soon Reclaim His Stolen Mandate At Tribunal – PDP