Benue State Governor, Samuel Ortom has lamented about the rising cases of killings in the country, alleging that President Muhammadu Buhari is working for the Fulani ethnic group to take over Nigeria. 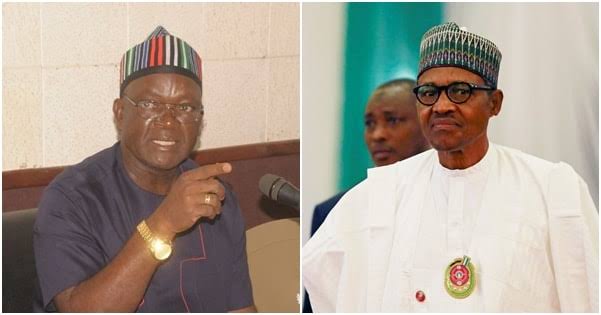 Governor Ortom stated this while addressing protesting youth at the Internally Displaced Persons (IDP) camp in Abagena village on Tuesday.

The youth were protesting the attack by suspected Fulani herdsmen on Monday night in which seven persons were killed and many injured.

Ortom said that Buhari’s actions and inactions showed that his administration was working to favour the Fulani people and take over the whole country.

He also lamented that no fewer than 70 people have been killed in the last two weeks in three local governments in the state.

READ:  I Rejected Tinubu As Running Mate In 2007 Due To Muslim-Muslim Ticket - Atiku

“What is happening now, to me, is very clear; Mr President is just working for these Fulanis to take over the whole country,” he said.

“His body language is what is being played out. The body language, the action and inaction of Mr President shows that he is only the President of Fulani people; I have known this.

“We are becoming a Banana Republic, if we have a President who gave the security agencies order to shoot at sight, whosoever is having AK-47 and the Minister of Defence came out to say that they cannot shoot at sight… so who is the Commander in Chief of the Armed Forces?”

Governor Ortom condemned the activities of herdsmen in the country, adding that Nigerians must come to hold the President to account.

“It is an unfortunate development that what is happening, if the federal government had taken a proactive step, we will not be where we are. In the last two week, over 70 persons just in Makurdi local government area alone. It is not acceptable.

“You recall that I alerted the entire nation when Fulanis from 14 countries met in Yola and declared that except we review the prohibition of open grazing law, Benue will not know peace.”

The governor said he had written to the federal government to arrest the leaders of Miyetti Allah that hosted that meeting but nothing was done.

READ:  Prince Charles Of Wales To Address Herdsmen Attacks During Visit To Nigeria With His Wife

“It means we don’t have a government. You can imagine, this is Abagena IDP camp. The adjoining villages are occupied by IDPs. What else do you want them to do?

“You send these people away from their villages, they came here to take refuge and today they are being killed in this manner. They no longer come here with their cattle because they want to suck blood.”

He called on President Buhari to rise up to his responsibilities and do the needful, noting that the assailants are not bandits but “Fulani herdsmen.”

”How do you wake up every day and see your people being killed? How can I be a happy man?

“Mr President must do the needful and I want to suggest that immediately let there be a security summit. I am aware that the situation is prevalent in other parts of the country.

“They are not bandits. They are Fulanis. We saw them and heard them speak the language.

“Mr President must rise up, he is the President of the Federal Republic of Nigeria and over the 250 nationalities that are in this country; Mr President is their President, we all voted him.

“He has taken oath of office to secure the country and provide security for lives and property; this is unacceptable, this cannot continue,” the visibly worried governor said.

‘We Don’t Have A Government At Federal Level’, Ortom Condemns Benue Killings pic.twitter.com/XyNUNFukOG

KanyiDaily recalls that Governor Ortom recently narrated how he narrowly escaped an assassination attempt when suspected herdsmen ambushed him on his farm.

READ:  "I Am A Muslim But Love Reading The Bible" - Girl Who's Picture Was Used For Viral Article Cries Out