The Spiritual Director of Adoration Ministry, Enugu, Nigeria (AMEN), Rev. Fr. Ejike Mbaka has resurfaced after he was declared missing on Wednesday by the Ohanaeze Ndigbo Youth Council Worldwide (OYC). 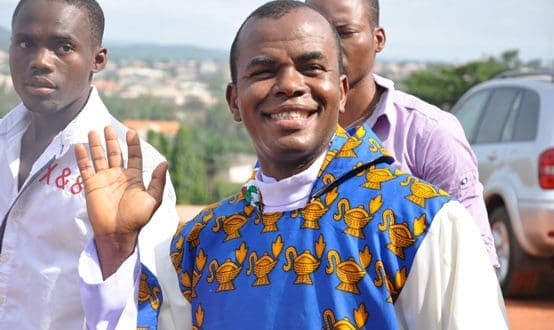 KanyiDaily recalls that Ohanaeze Youths had on Wednesday morning raised an alarm over the sudden disappearance of Father Mbaka.

The President-General of OYC, Mazi Okwu Nnabuike, said Fr Mbaka was last seen on Tuesday, adding that every effort to trace him had failed.

Ohanaeze warned the Nigerian Government to produce the outspoken cleric withn 48 hours, else they should be ready to face Igbo youths.

It was learnt that his disappearance sparked protest among youths who thought he had been picked up by security operatives or gunmen over his recent call on President Muhammadu Buhari to resign or be impeached.

However, in a live video update on Wednesday afternoon by BBC Pidgin, Mbaka was seen in an open roof car waving to protesters who surrounded him alongside operatives of the Nigeria Police Force.

Thousands of Enugu residents who were protesting Father Mbaka’s disappearance went into Jubilation at about 2:50 pm on Wednesday when the Priest re-emerged.

Mbaka was seen along Igboeze street in Independence layout close to Catholic Bishop’s court in an SUV vehicle where he received his faithfuls who had laid siege at the Bishop’s court demanding for Mbaka’s whereabouts.

Father Mbaka asked people to move to his adoration ground where he promised to address a press conference.

READ:  Nigerian Student Found Dead In His Car Boot After He Was Declared Missing in Cyprus [Photos]

KanyiDaily recalls that Fr Mbaka recently called for the resignation or impeachment of President Muhammadu Buhari over the high rate of insecurity in the country.