The Spiritual Director of Adoration Ministry, Enugu, Nigeria (AMEN), Rev. Fr. Ejike Mbaka has revealed that the Enugu Catholic Bishop, Most Rev Callistus Onaga, was behind his two days disappearance which sparked outrage among his followers. 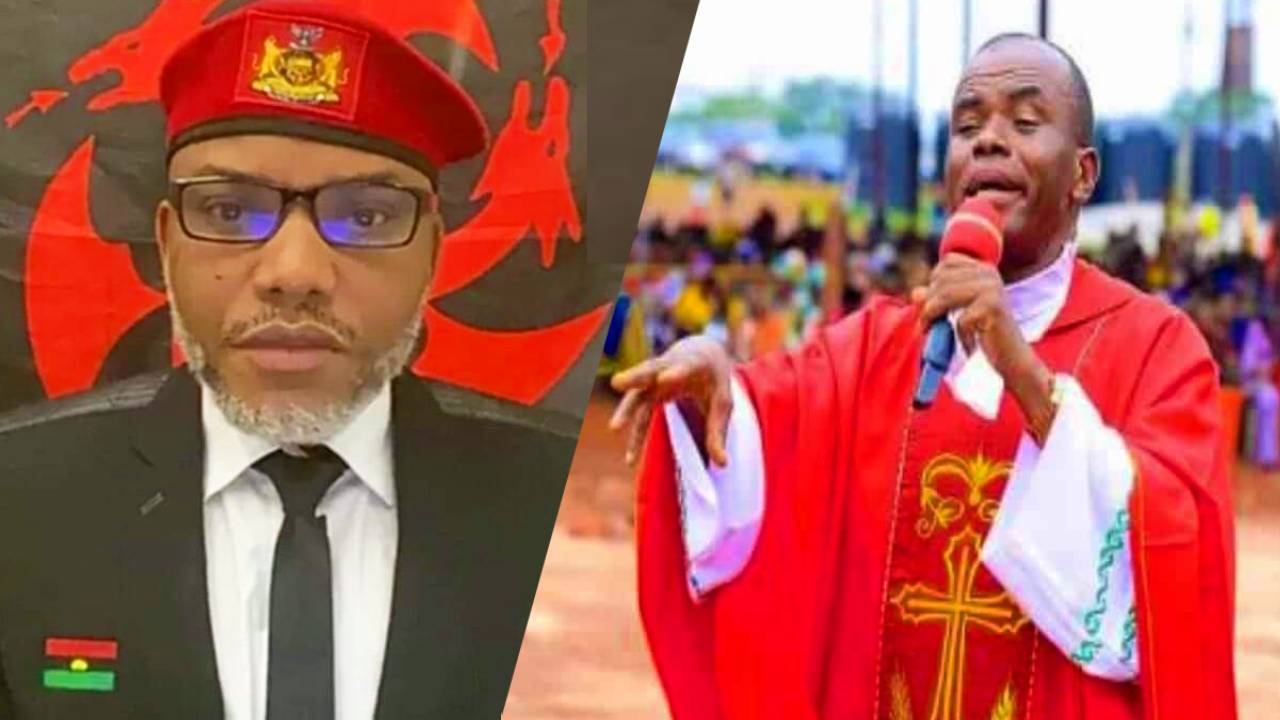 KanyiDaily had reported how Mbaka resurfaced at the Adoration ground in Umuchigbo Nike, Enugu, after a massive protest about his his sudden disappearance on Wednesday.

While addressing his protesting parishioners, Father Mbaka said he was summoned by the Catholic Bishop of Enugu Diocese where he was kept incommunicado, without any access to the outside world.

He accused Bishop Onaga of conniving with other church leaders to detain him because of the blessing he pronounced on the leader of the Indigenous People of Biafra (IPOB), Mazi Nnamdi Kanu as well as his recent his recent criticism of President Muhammadu Buhari’s Government.

Mbaka said a lot of issues were presented against him after which the Church leadership, led by Onaga told him that he would remain indoors for 30 days, a period that would allow him pray and meditate over his activities.

The priest said he requested to be allowed the opportunity to come and address his parishioners after which he would shut down, “but they said ‘No’.

“Allow me to go and celebrate Mass for my people just for today; I won’t even tell them that I am being punished; they said, No. I will just tell my members that I’m going for 30 days prayer, that after 30 days, we will come back and everybody will obey, they said, No”.

“I also begged them to appoint another priest to come and celebrate mass for you today; they also said No. They didn’t treat me in a pastoral way. I was asking ‘am I being punished for what’?

“They said it was a meeting, but even before I reached the Bishop’s house, conclusion had already been made. “What happened to me was like the day I was shot on the road.

“Unfortunately for them, even before the meeting, a woman was already going around bragging that the Bishop will call me for a meeting, and that I was going to leave my house here for 30 days, and that after the 30 days, I would be sent to Rome, and Adoration Ministry will be closed,”he said.

Mbaka said the church was strong against him for blessing Nnamdi Kanu.

“Are you the owner of my mouth? You can’t tell me who to bless? If you are not happy that I blessed someone, you have your own mouth, you can curse the person,” he declared.

Mbaka cautioned that “in a time and cases like this, don’t give me a punishment that will cause troubles for us because I’m not alone.”

The outspoken priest said Bishop Onaga upon seeing the massive protest in Enugu over his predicament, allowed him to go.

READ:  Nigerian Woman Dies Inside Moving Bus While Returning Back To The Country [Video]

KanyiDaily recalls that Fr Mbaka recently called for the resignation or impeachment of President Buhari over the high rate of insecurity in the country.

This comes just two days after Father Mbaka addressed the ‘contract allegations’ against him and dared the APC to report him to the Pope as threatened.