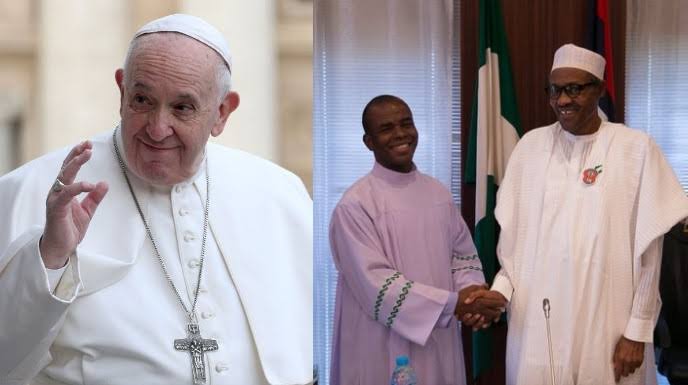 Mbaka stated this at the Adoration Ground in Emene, while reacting to an allegation by the presidential spokesman, Garba Shehu, that his recent call for Buhari’s resignation or impeachment was because he was denied contracts.

KanyiDaily recalls that Fr Mbaka had declared that President Buhari has failed Nigeria woefully and should resign or face impeachment over the high rate of insecurity in the country.

Reacting the call on Friday, Garba Shehu said Father Mbaka once came to the Presidential Villa with three contractors, but their attempt to convince the Buhari into compensating him with government projects failed.

According to Garba Shehu, this was the reason behind Fr Mbaka’s call for President Buhari to resign or be impeached over the worsening insecurity in the country.

However, while addressing thousands in his congregation on Sunday, Fr Mbaka said that no amount of government patronage was capable of influencing his utterances since he was speaking strictly under the leading of the Holy Spirit.

“Happy that the truth was hitting them. We are not afraid of them. Buhari cannot do it again; health and age are not on his side. We need a stronger and an experienced goal keeper in a time like this.

“If they want to put it that it was because of contract, let them come and build the highest university here and begin to mess up, I will still speak.

“I don’t want to talk about that because it’s a laughable and childish accusation. Whoever is saying that, is a shame to himself and shame to the people he is representing. Fr. Mbaka’s voice came from the spiritual. So what I’m saying is unchangeable.

“With enormous joy, I am happy that the truth is hitting them hard. No amount of money can merchandise the Holy Ghost anointing in me. Fr Mbaka is unbribable. Even if they come and build the highest university here, that cannot bribe me.”

READ:  Mother Of Four Accuses Rivers Hospital Of Stealing One Of Her Newly Born Twin Babies

Mbaka, however, admitted that he led three white men to meet with President Buhari during his first tenure, explaining that they were security experts who had offered to help in solving Nigeria’s security challenges.

“The three men he talked about, I am not here to defend anybody’s stupid allegation, but God used that man to tell the world that Buhari’s government is not giving me money.

“Shehu, may God bless you for telling everybody that you are not giving me a contract. And these are the three men that we brought that will handle insecurity for the country; they had the gadgets. The white people had the facilities. That was during the first administration.

“They said they will help them in conquering insecurity. They had the platform to end insecurity in this country under one month; under Abba Kyari. I just handed them over to the government people. They denied them of these.

“I don’t even know these people. They just came to Enugu and said, can I help them reach the government, that the level of insecurity in this country and how Nigeria has been shipping their oil out, refining and bringing them back, that we are losing.

“That they have all it takes to revive the oil apparatus in the country and get the whole youths employed and the issue of insecurity will die. These are the three people they rejected their offer, since they know how to talk.”

On the one hand, Mbaka said he had nothing to gain from the said meeting, but on the other hand, he attacked the presidency for not having a “reward mechanism”.

“All the people they have been giving contracts, are they better than me? Am I begging them, do they know how many people I feed? Fortunately, they reported that they denied me of the contract — which contract?”

“And even the people they are talking about that went there, I didn’t even discuss one percent of ‘if you get this contract’; contract of securing the country? What am I going to gain from it? As if to say when he pushes that, Father Mbaka is no longer a Nigerian,” he said.

“They have shown that they don’t have what they will call, reward mechanism. If Shehu is a human… I don’t even know who the Shehu is. He should be apologising that by now, they have not come down to say nagode Allah for surviving whatever they are passing through.

“The last person this administration should fight is Father Mbaka talking here because if they speak against me, the anger of heaven will be upon them and how they will end will shock everybody.”

The priest further dared the All Progressives Congress (APC) to report him to the Pope as threatened, over his recent call against Buhari’s government.

“If Rome hears that Father Mbaka is challenging evil governance, Rome will clap for me, so quickly go to Rome,” he said.

“Why I don’t want them even to report this to Rome is because if pope hears the extent of my involvement, they may give me a position I may not like. You want to report Messi to FIFA that he plays too much ball? They will make him soccer ambassador.”

READ:  Lawyer Jailed For Lying To Court About Her Son's Death, To Save Her Husband Who Murdered Him While Trying To Rid Him Of Demons

Watch the full sermon below: 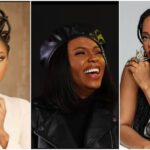 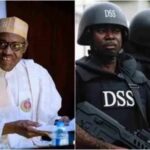