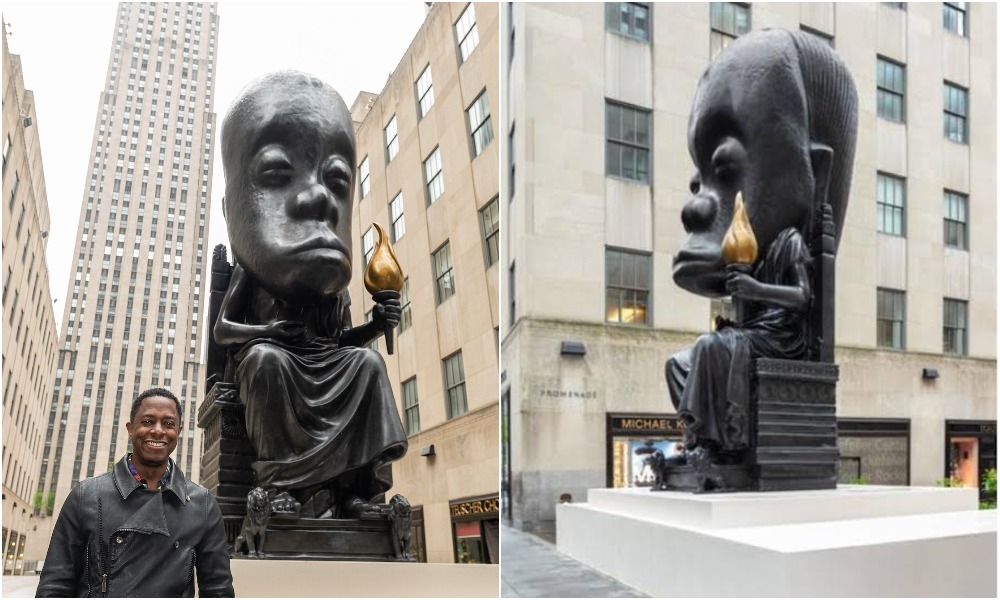 The monumental bronze sculpture that is standing 25 feet tall and weighing in at over 15,000 pounds was designed by a Harlem-based artist, Sanford Biggers.

The statue named ‘Oracle’ is the latest in the Biggers’s “Chimera” sculpture series, which merges African masks and European figures.

The seated body is inspired by the ancient Temple of Zeus, while the head is based on masks and other sculptures from various African cultures, including Luba art and the Maasai religion.

On the Oracle throne, there is the image of a lotus blossom, a recurring motif in the artist’s work where each of the petals is actually the cross-section of a slave ship.

The lotus also appears in photographic works Biggers has throughout the complex, which feature details from works in his “Codex” series, paintings and sculptures made from antique African American quilts featured in his recent exhibition at the Bronx Museum.

Artnet News reports that in the coming weeks, Oracle will also begin to live up to its name with the launch of an interactive component allowing viewers to consult the sculpture about their future after activating a QR code.

Through June 29, the sculpture will be voiced by “various celebrities,” according to Biggers, although he declined to name names.

Visitors will be able to ask the oracle anything they want, and if the oracle is “in,” they’ll get a live response from the day’s celebrity.

“They’ll respond as an oracle would,” Biggers said, “in mysterious, poetic vagaries which will hopefully be, if not helpful, at least mystifying.”

The 25-foot-tall bronze sculpture which was unveiled on Wednesday to honor African culture has sparked outrage among social media users.

A lot of people are (understandably) laughing at the 'African Culture' statue but I want to clear up the question on what the head is big.

Take note that these are examples from different artist, different areas, different eras but the exaggeration in proportions is NOT uncommon

can't even find the chimera series on his website. but yeah, i totally agree – esp. the way its being presented as an ode to "african culture" whatever the fuck that is🤷🏾

I tell you. Someone had a horrific dream woke up sketch his demons and said yes that's African culture

But omo men. Wetin be this? The thing just they vex me. African what? What culture? African is a full blown continent. Even one country among the 54 don't even have one culture. What is African culture? Man again just say black American culture.

From what I've seen most people are upset it "representing African culture" when there are THOUSANDS of African cultures, and this is just a very westernized stereotypical "African Culture"
I think if they wanted to represent the cultures they could have done it much better

I'm even more disturbed they've just lumped it up as "African culture", like Africa is a damn country.

They should flog both the artist and the statue.

Which African culture is this?

This is quite an ignorant art.

Wtf is in that statue which shows african culture

Ungade uthi this is “African culture”, that time you’re homogenising an entire continent.

This people no rate us at all, there no such thing as a general "African culture" but different ethnic nationality spread across the whole continent with their different distinct way of life…. Maybe some form of politics is involved but that's another story for another day…

Crazy people
They now tagged it "African Culture". They seem to forget that Africa is a continent on its own with lots of countries under it and this countries have lots of cultures under them. I don't see how this represents South African or Libyw culture🤷🤷🤷
This is just a

The monument on the left captures the energy and glory of Man. The monument on the right is an icon of demoralization; an image American progressives want in the public consciousness to represent the words 'African Culture'. https://t.co/AEf5ioIHEX

“This” was unveiled in Rockefeller Center in NYC to honor African culture. 😶

I would say that it perhaps represents or references some traditional West African masks, which would make sense because African-American ancestors are mostly from around there. But yes, not "African culture" in general, for sure.

Is there an African culture? Because I’m African but I’m not aware of that! My culture is very different from the closest clan’s culture. Ethnic groups within a geographical area speak different languages, you know like English and Spanish kinda thing. So wtf is African culture?

There's no such thing called "African culture". Africa is a continent with 55 countries, to each their own culture 🤦🏽‍♂️

"African culture," really? Africa is a continent with 54 countries, >2000 languages, > 3000 ethnic groups spread across diverse, dynamic cultures. Ever wondered why South Africa alone is called the "Rainbow Nation?" Africa & it's people is not a monolith. Whoever advised this?🤦🏽‍♂️

Afghanistan President, Ashraf Ghani Reveals Why He Fled The Country For Deadly Taliban