The Nigerian Senate has commenced a move to comfirm President Muhammadu Buhari’s social media aide, Lauretta Onochie, and five others as national commisioners in the Independent National Electoral Commission (INEC). 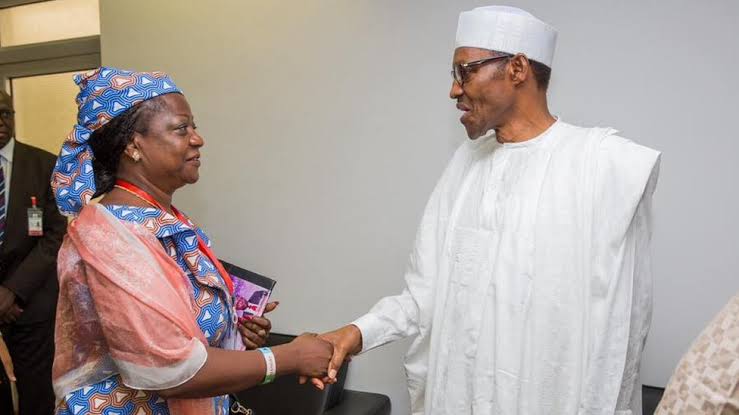 The development comes eight months after President Buhari forwarded Onochie’s name alongside others to the Senate and asked the upper legislative chamber to screen and confirm them.

Many Nigerians condemned the nomination because they believe Onochie is partisan and a staunch member of the All Progressives Congress (APC).

During theplenary on Wednesday, the leader of the Senate, Yahaya Abdullahi (Kebbi North) again asked the Senate to consider the request of President Buhari on the confirmations of the nominees as commissioners of INEC in accordance with paragraph 14 part I(F) of the third schedule to the 1999 constitution of the federal republic of Nigeria as amended.

READ:  Why Tinubu Or Atiku Should Never Emerge As President Of Nigeria - BBNaija's Pere

But before seconding the motion raised by the Senate leader, the Minority leader of the Senate, Enyinnaya Abaribe, raised concerns about Buhari’s aide, Onochie, who is a card-carrying member of the ruling APC.

Abaribe specifically Onochie had been rejected but added that they will meet at the committee hearing level.

“She was rejected but her name have been repacked and has resurface as Commissioner from Delta State,” Abaribe said.

Speaking, the Senate presidentk Ahmad Lawan, said all the nominees are national commissioner-nominees, adding that there is no change of request from the president.

“The request is hereby referred to the committee on INEC to report back in two weeks,” Lawan ruled.

This comes six months after some senators, mostly from the leading opposition PDP, rejected Onochie because she is “greatly partisan based on her conviction that the APC and President Buhari are the best for Nigeria”.