A lady identified as Miss Chidinma Ohazulike has been apprehended by some military personnel after she connived with her boyfriend to send a fake bank credit alert to a gold vendor in Lagos State. 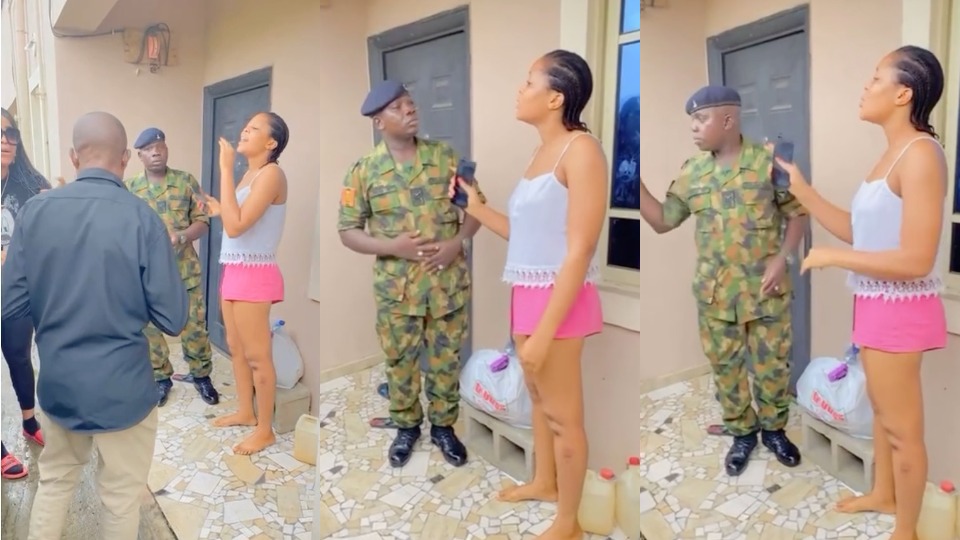 A video circulating on social media shows the moment the lady was busted by a vendor, Rhemmygold Collections, who tracked Chidinma to her house and took a military man there to demand “real payment”.

Sharing the video on Instagram, the vendor disclosed that admitted to committing the criminal act, adding that it’s her boyfriend who did the fake transaction alert to Rhemmygold company.

“Pls, refer to the above subject matter. Kindly be informed of the trending fake bank credit alerts where some dubious and criminal minded customers uses to cook and prepare fake credit alerts by using and editing the previous USSD messages which they might have received on their phones.

“The Public should take several note of this and beware of the criminal act, as a customer named Miss CHIDINMA OHAZULIKE in Lagos has just been caught after much investigation and interrogation that took the security personnel a whole month, CHIDINMA admitted that she committed the criminal act and that it’s her boyfriend who did the transaction (fake alert)to Rhemmygold company but to many other small and large scale businesses.

“We are equally aware that some bad elements are also into the same attitude, which I advice they should desist from such because y’all know every day is for the thief and one day is for owner.

“Nemesis will surely catch up one day. Not even this hard time that the rate of hard currencies are not smiling at us. Dear business owners kindly be as vigilant as possible‼️

KanyiDaily had also reported how a Nollywood actor, Olumide Olajide, was arrested for allegedly defrauding traders in Ibadan with fake bank alerts in Oyo.