Recently evicted Big Brother Naija housemate, Tega has reunited with her husband, Ajeboh Krislawrence, after leaving their matrimonial home to compete for N90 million prize in the reality TV show. 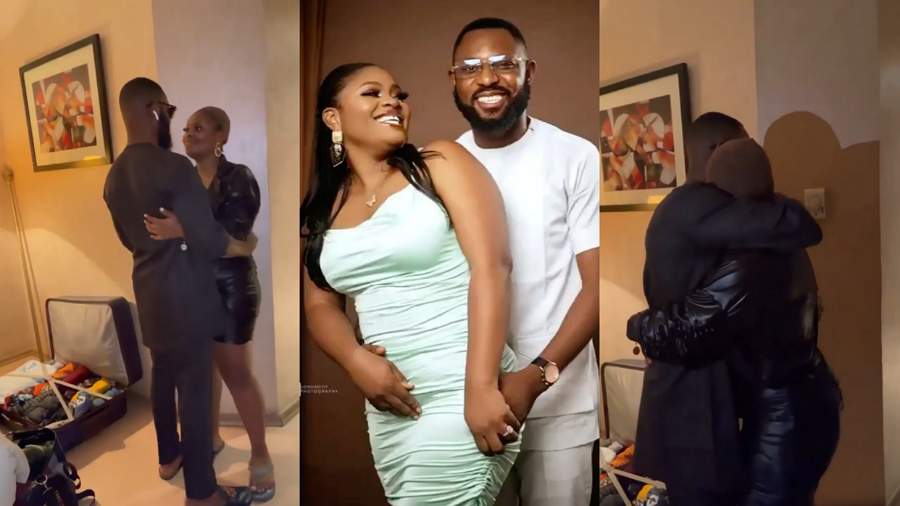 The couple have been in the eye of the storm after Tega was caught on camera having sex with a fellow contestant, Boma on the BBNaija reality TV show.

KanyiDaily had published videos showing the moment Tega and Boma were seen kissing and making out before they disappeared under the duvet during lights out at the BBNaija house.

In an interview on Monday, Tega’s husband, Ajoboh Krislawrence revealed that he will give his wife a second chance if she comes back and apologises for actions at the BBNaija house.

Tega Apologizes To Her Husband Over Her Actions

Tega in an interview with BeatFM on Tuesday morning said she has apologized to her husband over her romantic activities with Boma and that they are good.

The reality star also shared an emotional Instagram video on Tuesday, appealing to her husband, Nigerians, and her fellow women to forgive her actions, saying her life has taken a U-Turn and that she is not mentally okay.

“I want to say a big thank you to everyone who has supported and encouraged me despite everything that has happened. Words cannot express how grateful I am.

“I take full responsibility of my actions and I sincerely apologize to everyone that I disappointed and to those who could not stand my actions while on the show. I am truly sorry.

“To my husband; Babe, I know we have already talked about this but I want apologize again and also appreciate you for standing by me and giving me all the support I needed to pursue my career.

“To all the women out there who felt I let them down, I am sorry. To everyone who are still very angry and sending messages and comments, I do not see you as “trolls” I understand your anger and I want to say that I’m deeply sorry.

“Lastly, please pray for me and my family as we go through this phase together. Thank you everyone and God bless you,” Tega said amid tears.

Tega Share A Kiss With Her Husband During Reunion

In a video which emerged on Tuesday, Tega and her husband could be seen clinging to each other in a long hug as they met for the first time since her BBNaija eviction.

Tega hugged her husband tightly for a long time with tears in her eyes while they also shared kisses at intervals amid cheers from others in a hotel room.

READ:  Grammy Awards Postponed Until March Due To COVID-19