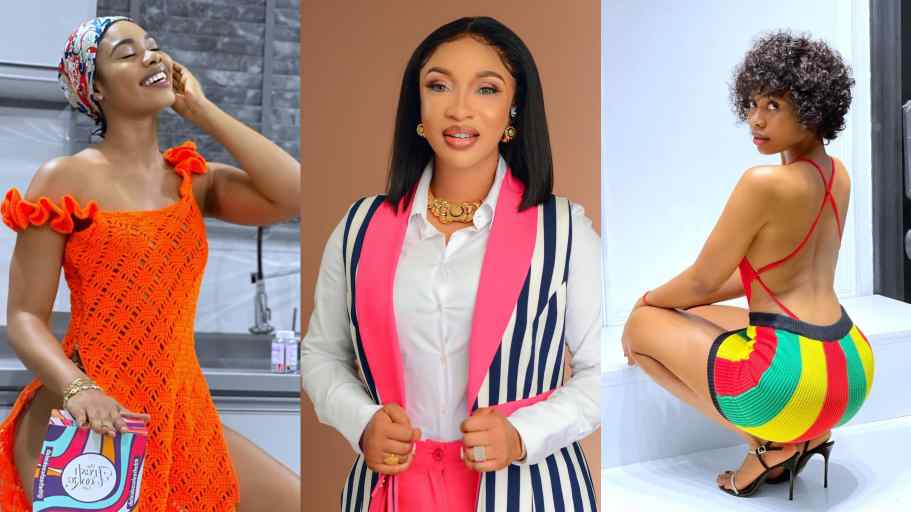 Tonto Dikeh had claimed last month that her ex-lover, Prince Kpokpogri, was in possession of old and recent sex tapes of Janemena who is married.

But Janemena filed a petition before the Nigerian Police, demanding a public apology and the sum of N500 million from Tonto Dikeh over the sex tapes allegation.

The 28-year-old dancer, who is married to her long-time lover, Andre Plies, accused the actress for cyberstalking and criminal defamation of her character.

Janemena maintained In her petition that no such sex tape exists, nor has she ever had a sexual relationship with Kpokpogri.

Taking to her Instagram page on Tuesday, Tonto Dikeh insisted that Jenamena’s sex tape exists, but won’t release it nor details of their conversation a week ago.

The actress also claimed that Janemena pleaded for an appointment with her to explain herself and save her marriage, only for the dancer to later come up with a petition.

Dikeh added, “I’m not as dumb as your boyfriend so I wouldn’t be releasing your tape nor your call a week ago. See you in COURT.”

In a swift reaction on her Instagram page, Janemena dared Dikeh to post the sex tape and call recordings, adding that she never begged the actress.

She wrote, “Miss Tonto Dikeh Wigo Charity, Mrs Janemena speaking. We never called to beg you or for you to save my marriage…. (ask people around who really know me and my husband).

“At least, try to save yourself first. I don’t even have your number in the first place nor have I met you in person before. I never spoke to you at all.

“Miss Tonto Dike Charity Wigo, I want you to post the recordings on this social media platform. I’m giving you that authority just Incase you think it’s illegal to post recordings.

“I want everybody to hear me and my brother talking to your friend and not you, because they recorded the conversations.

“I and my brother @aruaba_anthony spoke to a friend of yours called Mrs Doris where we told her very calmly that we wanted an audience with you so you could retract your misleading information where you tagged me and then apologize publicly as you know none of what you stated on your Instagram post ever happened.

“But Mrs Doris insisted and vowed with her life that you don’t tell lies and she also promised to try to reach out to you to see if a meeting can be organized and that was the end of the conversation.

“I am a peaceful person and I only wanted an apology for what you did, but since you like the mud…let’s play in it.

“Miss Tonto Dikeh, you are an adult and I want you to know coitus must take place before a sex tape can be made. I double dare you to release the sex tape through a fake page or any of your numerous bloggers since you are claiming it is illegal to release it on your page.

“Oba in the mud. I double dare you again and again. I am no fool.

READ:  Another Woman Dies From Injury Sustained At Asake's Brixton Concert In London READ:  Kylie Jenner Reacts After Being Dethroned By An Egg For 'Most Liked Photo' On Instagram