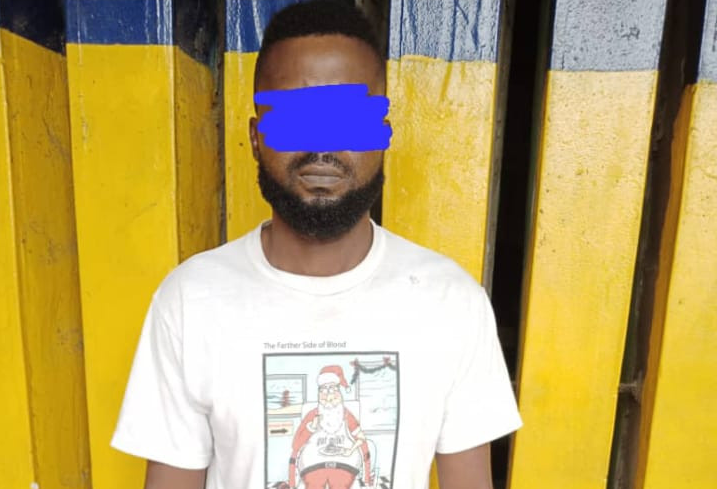 Sunday Ukeme was said to have defiled the girl after her mother kept her in the custody of his wife, Mary Sunday and travelled for three weeks.

The states Police spokesman, CSP Adekunle Ajisebutu, who disclosed this in a statement on Sunday, said the suspect was arrested after the girl’s mother returned from the journey and the victim reported to her that the suspect defiled her.

Ajisebutu said, “A 32-year-old married man, Sunday Ukeme, has been arrested by detectives attached to the Akodo Police Division, Lagos State, for defiling a neighbour’s daughter.

“The incident happened in Idaso town, Ibeju Lekki around 10.30pm of September 20, 2021, after the suspect’s wife left for a vigil in one of the churches in the neighbourhood.

“According to the victim’s mother who reported the case at the police station, when she returned from the journey, the victim reported to her that she was defiled by the suspect.

“Consequent upon the report lodged at the police station on 4th October, 2021, detectives immediately arrested the suspect. During interrogation, the suspect confessed to the crime. He, however, pleaded for mercy, blaming his shameful, immoral and criminal act on the influence of alcohol.

“The victim has since been taken to a hospital for medical attention. The case has been transferred to the Gender Unit of the State Criminal Investigation and Intelligence Department, Panti, Yaba, for diligent investigation and prosecution on the directive of the Commissioner of Police, Hakeem Odumosu.”

KanyiDaily had reported how a Nigerian police officer was caught on camera embarrassing himself after he reportedly got so drunk to the extent that he could barely stand on his two feet.