A 45-year-old man, Kwadwo Adusei, also known as Desco, has been arrested by the police for allegedly killing his friend over a dream in Ghana. 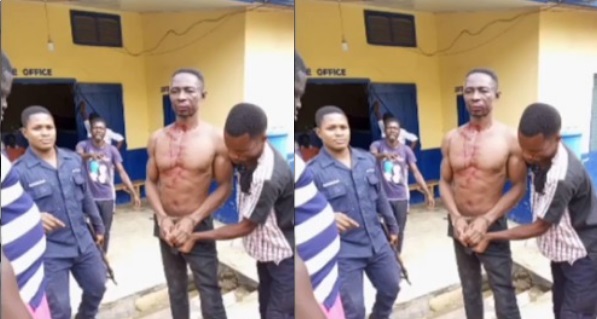 Kwadwo Adusei was said to have fatally stabbed his 48-year-old friend, Kwesi Banahene, because he allegedly saw him sleeping with his fiancée in his dream.

It was gathered that the incident happened last Friday after the suspect lured his friend to a bush where he stabbed him multiple times all over his body.

The deceased’s body was found in the bush after a search team was deployed to look for him after he was reported missing for days in the community.

READ:  Our Abductors Gave Us Their Phone Numbers, Professed Marriage To Us - Jangebe Schoolgirls

The suspect was said to have stabbed another person the following day over claims that the victim treated him unfairly in his dream and that he was also part of the challenges facing the community.

The man, however, survived the attack after he was admitted to the Ankaase Hospital. The news of his recovery angered the suspect who went on to stab the second victim’s son, an act he confessed to when he was eventually arrested.

He said, “I lured my friend into the bush and unknown to him, I stabbed him from the back. He fell down and I repeated it till he gave up his ghost.”

When quizzed about the attacks, Desco said he carried out the dastardly acts because he was trying to avert his dreams coming to pass as they always do.

KanyiDaily had reported how a man caught his wife in bed with his friend, and told him to take her and pay him the sum of N893,799.