Two masquerades have been arrested by the police allegedly stealing a phone and the sum of N370,000.

Ondo State Police Command arrested the two masquerades identified as Sheriff Ojo and Muhammad Lukman for allegedly attacking their victims with cutlasses and stealing at Melenge Community, at Ipele Town in Owo council of the state.

The command spokesperson, Funmi Odulami said the two suspects also inflicted injury on one Adinoyi Mohammed, the owner of the stolen money, at Ipele town, Owo local government area of the state.

She said, “The two suspects paraded themselves as masquerades, inflicted injury with cutlasses on one Adinoyi Mohammed ‘m’, dispossessed him of the sum of ₦370,000, a handset valued ₦32,000 and a shirt valued ₦2,500.

“They also inflicted injury on the victim’s father, Saliu Ajayi. Two cutlasses, charms and masquerade clothes were recovered from them.

“The two suspects had been arrested and will soon be charged to court while effort is ongoing to arrest the fleeing ones.”

KanyiDaily had also reported how some youths beat up a pastor for refusing to allow them to perform with their masquerade inside his church in Kogi State.

READ:  Man Stabbed To Death Over Cup Of Water 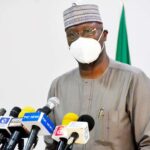