A Federal High Court in Abuja has adjourned the trial of the leader of the Indigenous People of Biafra (IPOB), Nnamdi Kanu till January 19 after his lawyers walked out of the courtroom. 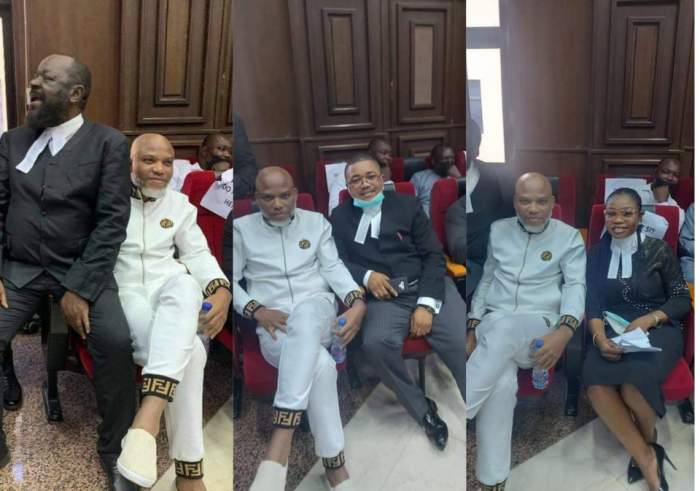 Nnamdi Kanu was brought into the courtroom around 9:52 am on Wednesday for the commencement of his trial before Justice Binta Nyako on a seven-count amended charge bordering on incitement, treasonable felony, and terrorism.

But there was confusion as Kanu’s team of lawyers staged a walkout over the refusal of operatives of the Department of State Services (DSS) to allow some of them to gain access into the courtroom, including Bruce Fein, Kanu’s lawyer from the United States.

When quizzed about the development from the dock, Kanu told Justice Nyako that Fein, who was handling a case for him in the US, was around to witness his trial.

He said, “I have an ongoing case in the US. I have not been allowed to see him. He is here to see me and to observe the proceedings. He has been to the DSS to see me, but they denied him access to me.”

When asked by the Judge, if he was ready to conduct the proceedings himself, in the absence of his lawyers, Nnamdi Kanu replied “no”.

READ:  Man Stabs Pregnant Woman To Death In Kogi Because She Told Him To Mind His Business

Meanwhile, counsel for the Federal Government and Director of Public Prosecution, M. D. Abubakar, urged the court to proceed with the trial in the absence of Kanu’s lawyers.

He told the court that the matter was fixed for the hearing of an application that was filed by the defendant.

Abubakar argued that since Kanu’s lead counsel, Ifeanyi Ejiofor, who was initially inside the courtroom, walked out with his team shortly before the arrival of the judge, his pending application should be deemed abandoned.

Delivering a short ruling, Justice Nyako expressed displeasure over the conduct of Kanu’s lawyers. She declined to dismiss the pending application and rather adjourned the case till January 19 and 20, 2022, for trial.

KanyiDaily recalls that Nnamdi Kanu’s lawyer, Ifeanyi Ejiofor had accused the DSS of preventing, Bruce Fein, a US constitutional lawyer, from visiting Kanu in detention.