The Department of State Services (DSS) has denied reports that it is maltreating the leader of the Indigenous People of Biafra (IPOB), Nnamdi Kanu, who is currently detained in its facilities in Abuja. 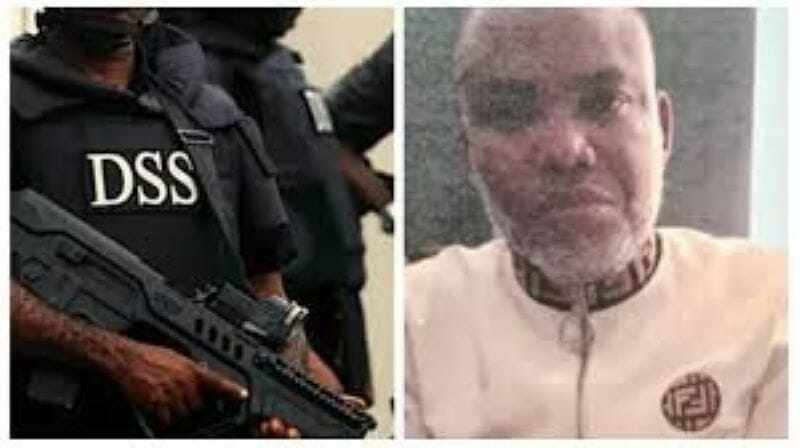 KanyiDaily recalls that the IPOB had also accused the DSS of maltreating and starving Nnamdi Kanu in their custody for three days consecutively.

Kanu’s lawyer, Maxwell Opara, had also alleged that despite a court order by Justice Binta Nyako, compelling the DSS to allow his client to change his clothes and practice his Jewish faith, the secret police flagrantly ignored the orders.

Mr. Opara also recounted his last visit to the DSS detention facility, where Kanu reportedly complained “bitterly” that his blood was extracted more than 21 times by a doctor, whom he suspected to be a “quack.”

However, during a press conference in Abuja on Tuesday, DSS spokesman, Dr. Peter Afunanya boasted that Kanu enjoys full luxury and he’s given a Very Important Person (VIP) treatment in its custody contrary to claims by his lawyer.

Describing the story of Kanu being starved as fallacious, Afunanya said the IPOB leader is enjoying meals of his choice and has never been denied a change of clothes and practice of Jewish religion.

Afunanya said: “On IPOB and the alleged ill-treatment of its detained leader, the Service has, without any fear of contradiction, applied restraint in making public statements over the matter. The reason is simply because it avoids joining issues especially over a matter that is sub-judice. But for the sake of transparency and democratic accountability, the Service has decided to make some clarifications.

“The Service denies all the inciting allegations by IPOB and states that Nnamdi Kanu is not, in any way, maltreated in custody. Accusations of maltreatment negate the Service’s Standard Operation Procedure on the implementation of rights of a suspect.

“Nnamdi Kanu enjoys full luxury in the holding facility incomparable to any of its type anywhere in the country. He is accorded full rights and privileges. He is never denied his right of worship or freedom from his select religious practice.

“Adequate attention is paid to Kanu’s health. He has unhindered access to the best medical care and doctors. Kanu, himself, has confirmed to his visitors that the Service has never, in any way, maltreated him. He even confirmed this to the quartet of Senators Ike Ekweremadu and Enyinnaya Abaribe; Bishop Sunday Onuoha of the Methodist Church, Nigeria and Co-Chair, Interfaith Dialogue Forum for Peace and Ambassador Okechukwu Emuchay, MFR, Secretary-General, Ohanaeze Ndigbo, who saw him on Wednesday, 8th December, 2021.

“The story of Kanu being starved is fallacious. He could not have been starved as he enjoys meals of his choice. That he is not allowed change of clothing is also false. He is regularly allowed change of clothing as against what is presented to the public by IPOB propagandists. Assuming he is being maltreated, how come his visitors told him he was looking well? All the allegations of violation of his rights as a suspect, victimization and starvation among others are not true.

“It is unfortunate that some elements have decided to use outright misinformation to represent the state of affairs. Those who make these false stories do so to attract undue attention for the singular purpose of achieving a desired end.

“Rather than focus on how he should get justice, Kanu’s legal team and some mischievous elements among them have chosen to use fake news to mislead the public. While the Court in its wisdom ordered that Kanu be remanded in the safer DSS Custody, some of his legal representatives, for reasons best known to them, preferred Kuje Prison and have failed to explain the rationale for such choice.

“It may interest the public to note that a particular lawyer among Kanu’s Team is feasting on the matter such that one can conclude that his interest is beyond getting justice for his client. Be that as it may, the Court has the final say on the matter.

READ:  Those Who Demolished Nigerian High Commission Will Be Punished - Ghanaian Government

Afunanya further stated: “Instructively, the media is reminded of its duty in national security. As influencers, media practitioners are called upon to use their platforms to pursue peaceful coexistence.

“They must commit themselves to the unity of the country and shun misinformation, fake news, hate speech and such other misleading narratives. Journalists, while discharging their constitutional roles, are enjoined to be objective, conflict-sensitive and patriotic in their reportage.”

KanyiDaily recalls that Nnamdi Kanu’s lawyer, Ifeanyi Ejiofor, and his brother, Prince Kanu, had also cried out that the separatist leader was denied food, medical care, change of clothes and other provisions ordered by the court.

Related Topics:courtDSSNewsNnamdi Kanu
Up Next