Rivers State Governor, Nyesom Wike has sealed the campaign office of the presidential candidate of the Peoples Democratic Party (PDP), Atiku Abubakar, in the state. 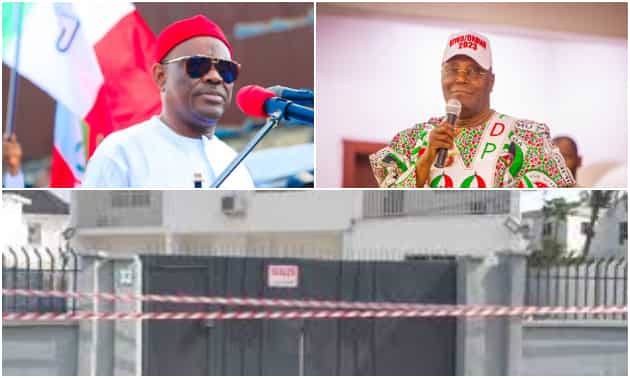 It was gathered that Atiku’s campaign office located in Port Harcourt, the state capital, was sealed on the directive of the Rivers State government following a court order on Friday.

“The Rivers state government approached a court which ordered that the place should be sealed up,” Ebiri said.

“The Rivers state executive order 22 prohibits the location of a political campaign office in a residential area. It was the court that ordered the place to be sealed up.”

Friday’s development is the latest in a cycle of controversies involving Abubakar and Wike, a governor elected on the platform of the party.

With the 2023 presidential poll about two months, there are fears that the intra-party squabbles between Wike and Atiku over the chairmanship of Ayu would affect the chances of the PDP at the polls next February.