The Minister of Information and Culture, Lai Mohammed has revealed that the federal government would soon commence a national sensitization campaign against ritual killings in the country. 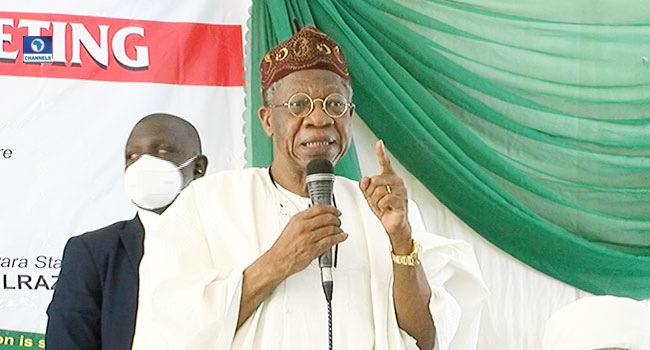 Speaking during a visit to the Daily Trust office in Abuja on Monday, the minister expressed concern over the rising cases of ritual killings in the country, adding that the government needs to take urgent steps to address the situation.

Mohammed said the National Orientation Agency (NOA) was already collaborating with religious, traditional organisations, and non-governmental organisations (NGOs) to forge behavioural change, especially among the youth, some of whom are afflicted by the get-rich-quick syndrome.

The minister said he had also directed the National Film and Video Censors Board to take the issue of regulation of Nollywood movies featuring money rituals in some of its movies into consideration while performing its role of censoring and classifying films and videos.

He said the mandate was because many have blamed Nollywood for depicting money rituals in some of its movies that have negatively influenced the vulnerable youth.

He said, “Our visit today is coming at a time of great concern across the country over the rising cases of ritual murders by unscrupulous people, most of them very young, who are seeking to get rich at all cost. We have therefore decided to use this opportunity to begin the process of raising national awareness on this scourge.

“The National Orientation Agency (NOA), an agency under our ministry, is already partnering with religious and traditional organisations as well as NGOs to forge behavioural change, especially among the youth, some of whom are afflicted by the get-rich-quick syndrome.

“In the days ahead, the federal government plans to launch a national sensitisation campaign against ritual murders. Ahead of that, however, we are calling on the media to please lend their strong voices to efforts to stamp out this growing menace.

“For those who may still be in doubt, ritual killings have assumed a worrisome dimension in recent years. The fact that some of these ritualists said they learnt the money-making tricks from some social media platforms has given a further fillip to our campaign to rid social media of unwholesome content.

“Many have also blamed Nollywood for featuring money rituals in some of its movies, saying this has negatively influenced the vulnerable youth. To mitigate this, I have directed the National Film and Video Censors Board, the body set up to regulate the film and video industry in Nigeria, to take this issue into consideration while performing its role of censoring and classifying films and videos.

“I have also directed NFVCB to engage with stakeholders in the film industry in order to express the concerns of the government and Nigerians on the need to eschew money ritual content in their movies.

KanyiDaily recalls that the House of Representatives had called on the President Muhammadu Buhari-led government to declare a state of emergency on ritual killings in Nigeria.