Controversial Nollywood actress, Tonto Dikeh has come under heavy fire on social media after her son, King Andre, was caught on camera smacking her backside. 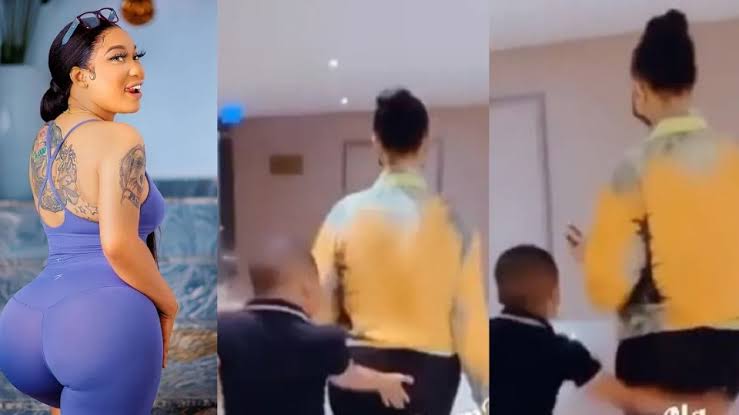 In a video circulating on social media, the small boy could be seen running after his mother and hitting her several times on her backside as she took a walk.

An onlooker who recorded the whole thing warned the six-year-old boy to stop hitting his mother’s backside, as the actress seemed unbothered by her son’s actions.

When Andre finally landed a loud one, it drew a response from Dikeh who shouted at him while he took to his heels that he wants to break the bumbum which worth N5 million.

The video post has so far generated a lot of reactions from social media users who condemned Tonto Dikeh for allowing her son smack her buttocks the way he did.

READ:  "I Will Rather Go For Adoption Than Have My Own Kids" - Busty Actress, Monalisa Stephen

I hope Tonto's son won't go about
spanking other girls bum bum thinking it's cool bcos it was cool when he did it to his mom?

You can condemn Tonto’s actions without dragging every other single mom into it. Some women do not choose to be single moms. It’s on this same app that we were encouraging women to leave abusive marriages that it’s better to be single than dead.

This is disturbing! Tonto is raising a perv

A woman can't teach a boy how to be a man just as a fish can't teach a fisherman how to fish. #bookofmen pic.twitter.com/EQSNVa9Ksw

Omo, I just saw that video Tonto Dike’s son spanking the yansh of her mother & they were all laughing & no one give him a better knock.

They are building a bad attitude in him & they should stop him NOW.

He might thing spanking yansh of people is legit o.

So apparently Tonto Dikeh’s child was tapping her ass and she responded with “stop it” jokingly and you want to break my N5M bum bum.

According to IG comment section, many were laughing and some said “bad parenting”.

I won't be surprised if she actually svcks this boy's preeq or forces him to give her head.

I'm certain he already does drugs like his crackhead mother.

If my son spanks my ass, I fit nod am.

I can't believe that there are women defending Tonto Dike's poor parenting.

Where is it okay to tap one's ass? Y'all are thinking about the present and how cute it is because he's boy, forgetting that the present will influence the future.

Always remember that scums are raised by women. Tonto Dike is a prime example .

KanyiDaily recalls that Tonto Dikeh had recently warned parents to train their children well because she will not take easy with any child who hurts her son, King Andre. 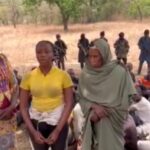 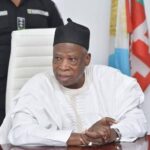