At least three persons have been killed, while several others sustained injuries in an explosion that occurred in Iware community of Taraba state. Taraba police spokesperson, Usman Abdullahi, who confirmed the development on Tuesday, said the incident occurred at a drinking spot within the Iware cattle market axis.

According to him, the explosion is suspected to have been caused by an improvised explosive device (IED) that detonated at the market area.

Abdullahi said, “Three people were killed in the explosion, while 19 people were found injured. The explosion is suspected to have been caused by an improvised explosive device which detonated at the market area.

READ:  Pregnant Side Chic Trade Words With Lover’s Wife As She Pack To Their House [Video]

“You know the history. Iware is a very prominent market that has about three markets. We have the cattle market, where cattle and other animals are sold, and we have another market where people sell and buy grains and other stuff.

“We also have an attached market at the outskirts of the town which is where the locals drink. The unfortunate accident happened at the joint market where people were busy drinking.”

Abdullahi added that an investigation into the incident has begun, while security operatives have been deployed to the area.

KanyiDaily had also reported how gunmen killed eight traders during an attack at a new cattle market in Omumauzor, a community in Ukwa West LGA of Abia State. 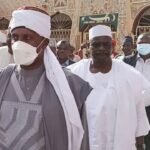