Over 32 people have been reportedly killed by bandits who used an helicopter to attack four communities within Kajuru Local Government Area of Kaduna State. 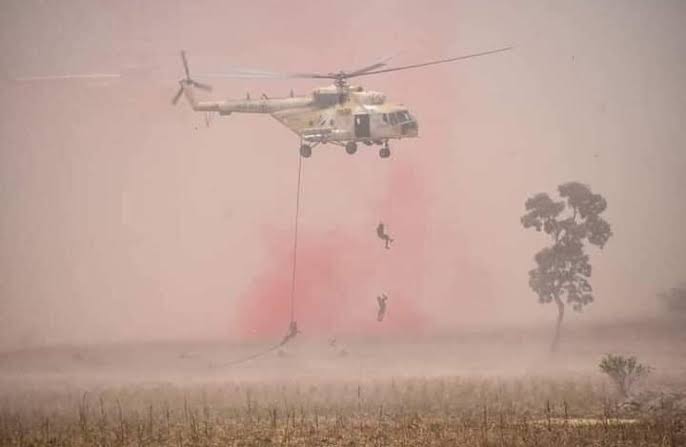 According to him, the bandits stormed the communities on 150 motorcycles carrying three AK-47-wielding persons each on Sunday and that 32 people lost their lives while a church and several houses were destroyed in the process.

Maisamari said that while the terrorists were carrying out their operations in some areas, the youths mobilised to repel the attackers at Maikori village and were already recording some successes as they were taking control of the situation.

Shockingly, a helicopter appeared and started air strikes against the natives who were trying to defend themselves. This made the youths run in search of safety, enabling the invaders to burn down the whole community.

The statement reads, “In the latest tragedy, Ungwan Gamu, Dogon Noma, Ungwan Sarki and Maikori villages near Maro in Kajuru LGA were attacked on Sunday, 5th June, 2022. The death toll this morning is 32 as villagers comb surrounding bushes for more corpses.

“7 corpses were found this morning in varying degrees of decomposition. The attack started around 12 noon and lasted until around 6 pm unchallenged by the state. It was carried out by Fulani terrorists mounted on 150 motorcycles carrying three AK-47 wielding persons each.

“When the armed killers were carrying out the killings around 3 pm, the villagers mobilised to repel the attackers at Maikori village.

“The valiant natives who came out in large numbers from neighbouring villages were already driving back the invaders and taking control of the situation when a helicopter appeared.

“To the horror of the natives, the white-painted helicopter faced the brave natives instead and started gunning the youths from the air, clearly leaving out the killers who can be distinctly identified by the mode of dressing and from their positions.

“There was no way that poorly armed farmers using crude weapons could face the combined fire strength of better-armed herdsmen and a gun-mounted helicopter. With no other options, the Adara youths had to scamper for safety.

“We are not yet sure how many of the casualties were caused by the gunshots from the helicopter. But some injured persons are taking treatments in various hospitals.

“Some houses were burnt at Ungwan Sarki but Maikori village was completely destroyed. The ECWA church in Dogo Noma was razed down. Some houses in Unguwan Sarki and Unguwan Gamu were also burnt.

READ:  A Serial Killer Is On The Loose In Port Harcourt, But Nigerian Police Blames It All On Prostitution

“The burial of victims was disrupted yesterday, Monday, 6/6/2022 as the Fulani terrorists were sighted in nearby bushes.

“Furthermore, many people are still missing and some of them are believed to have been abducted by the assailants. So far, no contacts have been made. The attack has caused serious panic, leading to the displacement of thousands of people in the area.

“Most of the displaced persons, especially women and children are still relocating to places like Katul Crossing, Kachia, Idon and Maraban Kajuru.

“The attack has compounded the already very bad humanitarian situation in Kajuru LGA because Kutura station and other neighbouring villages were similarly destroyed and displaced on 8th April 2022.

“There have been too many reports of helicopters dropping weapons and provisions to bandits in their locations both in and out of Adara Chiefdom.

“The Nigeria Air Force should speak on this incident to clear the air. We are calling on the government and other people of conscience to come to the aid of our displaced and dehumanised people.

“The ADA also wishes to express its outrage with the Kaduna State Governor for abandoning the people to the mercy of Fulani terrorists.”

KanyiDaily had also reported how the bandits were seen in a bideo wielding several rocket-propelled grenades (RGPs) while threatening abducted passengers who were begging the Nigerian government “to do something” about their release.