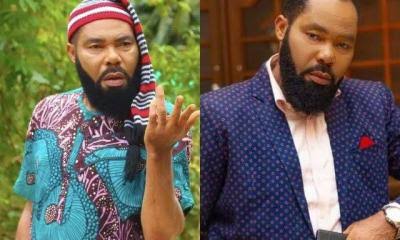 The National President of the Actors Guild of Nigeria (AGN), Emeka Rollas, who confirmed Armstrong’s arrest, stated that the case is “a very serious one”.

He disclosed that the case is being handled by Akwa Ibom’s First Lady, Martha Udom Emmanuel through her Family Empowerment and Youth Re-Orientation Path Initiative.

Rollas said: “To get involved with a child as young as 16 years, is not something I and the association I represent stand for.

“This is a very sad development involving a member of ours, but I would not want to comment any further on this case.”

The AGN president added that the organisation frowns at such a crime.

Armstrong is a native of Akwa Ibom known for his role in movies such as ‘Immoral Act’ and ‘Tears in My Heart’.

The actor is a special assistant to Akwa Ibom State Governor, Udom Emmanuel.

He lost Rita Amstrong, his wife who was an actress, in 2018. She was said to have passed away from spinal cord injuries sustained from an accident.

KanyiDaily had also reported how popular Yoruba actor, Ganiyu Oyeyemi aka Ogunjimi was arrested by the police for allegedly raping one of his daughter’s friends at his home town in Osogbo, Osun State.

2023: Nigeria Needs A Total Overhaul, I’d Rather Die Fighting For A Cause – Rapper Falz