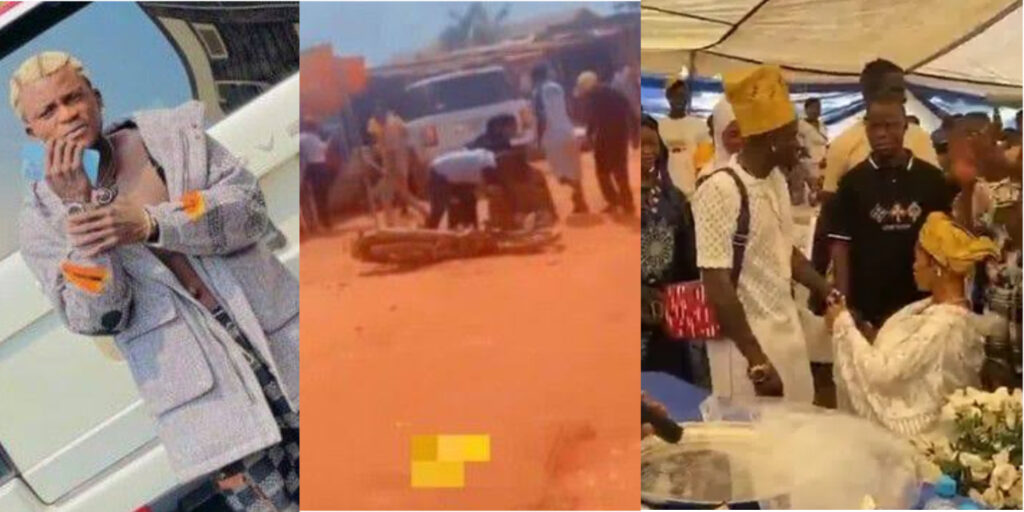 KanyiDaily recalls that the couple had welcomed their second child together last week and the naming ceremony was scheduled for Tuesday.

During the child’s christening on Tuesday, Portable and Ewatomi exchanged wedding bands in the presence of Islamic clerics, their families, and well-wishers.

A video circulating on social media shows the moment when Portable slid the ring on his lover’s finger and she reciprocated the action.

After the exchange of rings, the excited singer brought out bundles of naira notes from his bag and ‘sprayed’ them on his smiling bride.

The wedding is coming at about the same time when the singer’s aide driver, who was running an errand, killed a motorcyclist at the Iyano Ilogbo axis of the state.

Portable’s manager identified as Theresa confirmed the incident to PUNCH, saying the motorcyclist died shortly after he was rushed to the hospital.

She said, “I’ll be very fast with you because I’m very busy. I was the one that sent one of his boys to go and buy something for me.

“On their way going, maybe the bike man thought that Portable was the one driving or they wanted to collect money or whatever, but the man drove to the vehicle. That was how they hit the man.

“They called me. I left where I was with Portable. We went there. The guy that drove the car rushed the man to the hospital. I got to the hospital and transferred N25,000 to them. They said N20,000 was for treatment while N5,000 was for X-ray.”

Theresa said that when she got to the hospital, the bike rider was complaining about pains on his back, but his two female passengers were unhurt.

“When I left the hospital, I gave them another N8,000 to take a cab to where they were going to conduct the X-ray. Immediately I left there, I reported to the Divisional Police Officer and the commissioner of police,” she added.

“I called DPO Sango and DPO Ifo to explain what happened. After 10 minutes, they called me back from the hospital that the man had given up.

“When I got the call, I had to call the boy that was in the scenario to go to the station to report himself. He is at the station as I’m talking to you like this.”

This comes hours after Ogun State Police Command ordered Portable to report himself at the nearest police station over a video clip circulating on social media, where he was said to have organized some youths to beat up a young man.

READ:  Nonso Diobi surprises his mum with a Mansion on Mother's Day