President Muhammadu Buhari will depart Abuja on Wednesday to participate in the International Development Association’s (IDA) summit in Dakar, Senegal. 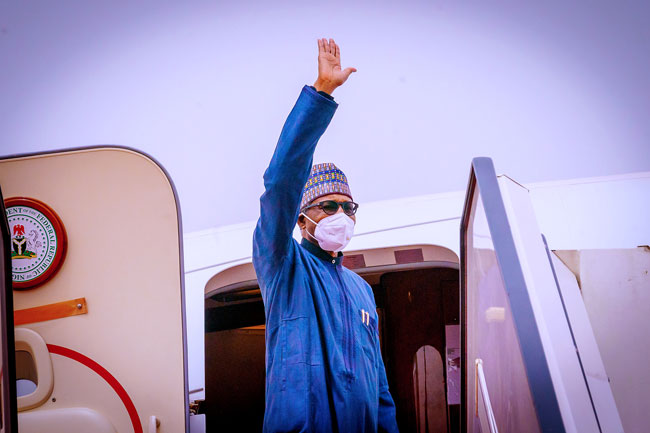 The development comes a few hours after gunmen attacked Kuje prison in Abuja on Tuesday night, freeing over 500 inmates including Boko Haram insurgents.

A statement signed on Wednesday by his Senior Special Assistant on Media and Publicity, Garba Shehu, confirmed Buhari’s participation in the International Development Association (IDA).

The IDA is an international financial institution which offers concessional loans and grants to developing countries. It is a member of the World Bank Group.

Shehu said President Buhari is expected to join other African leaders in an open dialogue on development challenges and priorities.

READ:  Okorocha Storms Abuja Court In Pursuit Of His Senatorial Certificate Of Return

The African leaders will also dialogue on transformational initiatives that will lead to an outcome document, the Dakar Declaration.

The high level summit slated for July 7 would be hosted by President Macky Sall of the Republic of Senegal.

“​This commitment is expected to chart the way forward for the transformation of the economies of the participating nations in partnership with the World Bank/IDA.

“Topics slated for discussion include: Financing for Recovery and Economic Transformation in Africa; Agriculture, Livestock and Food Security; Human Capital; Digital and Technological Innovation; and Energy Transition and Climate Change,’’’ he stated.

The president will be accompanied on the trip by the Ministers of Foreign Affairs, Geoffery Onyeama; Finance, Budget and National Planning, Zainab Ahmed; as well as Industry, Trade and Investment, Adeniyi Adebayo.

Others on the entourage are the Governor of the CBN, Godwin Emefiele and the Director- General, National Intelligence Agency, Amb. Ahmed Abubakar.

The Director-General, Debt Management Office, Patience Oniha and the Managing Director of the Bank of Industry, Olukayode Pitan are also on the president’s entourage.

President Buhari and his entourage are expected to return on Thursday.

The trip also comes a few hours after gunmen suspected to be bandits attacked the convoy of President Muhammadu Buhari in Katsina State, wounding two officials.

I’m Disappointed With Our Intelligence System, How Can Terrorists Attack Kuje Prison And Get Away With It? – Buhari Asks

OPEC Secretary-General, Mohammed Barkindo Dies After Being Honoured By Buhari