Popular fashion designer, Toyin Lawani has made a shocking revelation about her upbringing.

According to her, she was raped by her uncle when she was 15 years old and it resulted in a pregnancy.

Lawani, who disclosed during an interview with media personality, Jideonwa on his With Chude, said the incident happened just a year after her father had disowned her.

“When I was 15, I got raped by someone in my neighbourhood. And it was one of my uncles. And I couldn’t tell my mum. It was just so bad for me. You know when someone bullies you to the extent that you can’t talk,” the fashion designer said.

“It was so bad. I opened up to one of my aunties. Aunty Bola. She’s late now. She took me to Ibadan. They tried to get rid of the pregnancy. It was the same time I had to get my admission to UNILAG.

“My mum and dad are late now. They had to take me to a hospital when the pregnancy was about five months already because I didn’t tell anyone. There was like a baby already and it was coming out on me. I got so sick.

“My mum was calling me to come back, asking why I was still at my grandma’s house. I went to get my admission and fainted on the premises. They took me to a hospital and my mum came. The doctor opened up to her.

“He said, ‘Your daughter was pregnant and we took it out.’ She couldn’t take it because I was so young and I didn’t tell her these things. The person was so close to our family. This is why I’m so strict with my kids.”

Lawani said her childhood experience caused her to develop distrust with family members as regards her kids.

“I don’t trust anyone. Even your brothers and sisters. Anybody can betray you. I felt I lost my innocence to someone that was in the same house with us. You travel so much to feed your kids. My mum was always working,” she added.

“I hated my mum so much for it because she wasn’t there. I was young and didn’t understand until now that I had to do these responsibilities for my kids. She had to leave us and travel to Hong Kong, China. It traumatised me.

“My dad disowned me at 14. My mum died at 46 from cancer. I started my life at 16, at which time I had three shops in UNILAG. When I left my rich ex who said I couldn’t work, I was sleeping in a hotel with my daughter.

“I believe in carrying my legacy on. I don’t care if I die young anymore. My mom died 46. Who am I?”

Watch the video of the interview below 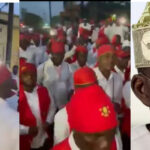 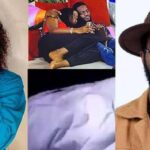