Nollywood actor, Olanrewaju James, popularly known as Baba Ijesha, has told an Ikeja Special Offences Court that he was acting a movie script with a minor in the viral closed-circuit television (CCTV) footage used as evidence against him. 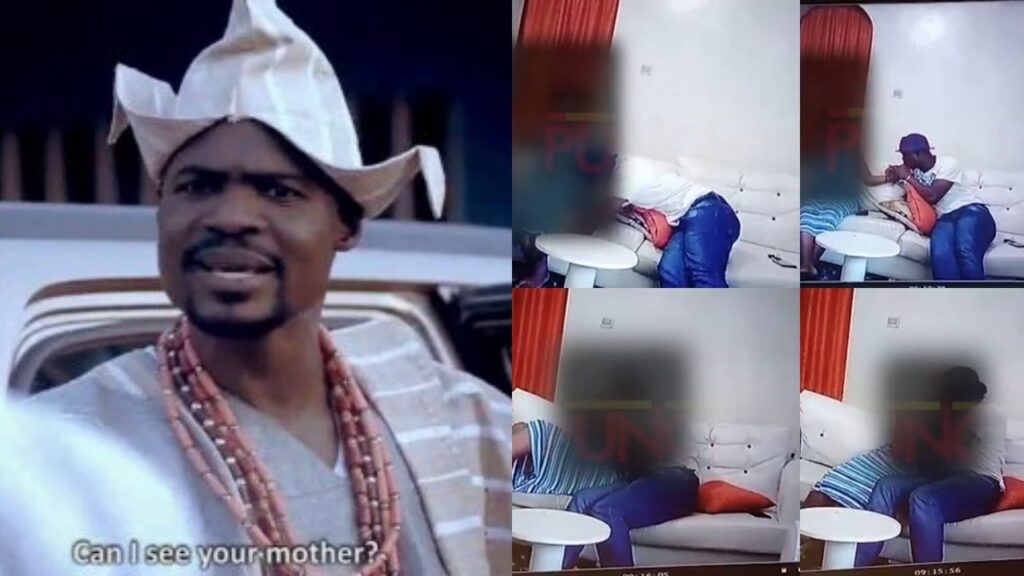 The foster mother of the 14-year-old girl allegedly molested by the actor, Damilola Adekoya alias Comedian Princess had earlier tendered CCTV footage of the incident before the court.

While being led in evidence by the defence counsel, Dada Awosika, on Friday, March 4, Baba Ijesha said he was acting a script in the viral CCTV footgae with the minor.

The News Agency of Nigeria (NAN) reports Baba Ijesha told the court that the foster mother of the minor, Damilola Adekoya, a comedian also known as Princess, had called and requested him to be part of the movie production.

He said, “On April 19, 2021, Princess sent me a message that she wanted to start a production and she would like me to play the role of a lover boy which I replied ‘okay’.

“She said I was to play the role of a lover boy adding that she wanted to surprise people that I can also play normal roles. She said the story is about rape and she wanted to tell the story in another dimension.”

The defence counsel tendered before the court, a printout of WhatsApps message between Princess and the defendant, which was admitted into evidence by Justice Oluwatoyin Taiwo.

The embattled actor said he asked Princess for the movie location but she told him to come over to her house that she wanted to improvise and create a story by herself.

READ:  Man Stabbed To Death Over Cup Of Water

He said, “Before I entered, Princess met me at the balcony that the movie production was a Lagos State project, adding that the state wanted her to be the face of ‘anti child molestation.’

“She told me to improvise and create a story by myself. I told her the house was dark when I entered. She said we should rehearse that she would use her phone.

“Princess told me to kiss and suck the breast of the child, adding that the dress the girl was wearing was purposely for the role the girl wanted to play. She would leave the room so that the child would not be shy to play out the role.

“All those things we are seeing in that video is just acting. My lord check my record when it comes to acting, I can kill myself and die for acting. She was the one directing and filming my angles.”

Baba Ijesha told the court that himself and Princess were directors of the movie, adding that she told him he could act out the scene in the kitchen as well.

“She told me I could go into the kitchen as well. She told the girl in question you remember what I told you, when I leave the room now, act out your role perfectly.

“The girl removed my shoe and I started acting out my role. I romanced her based on the movie role Princess gave me.

“As I was acting with the girl, kissing and licking her fingers, I was also whispering to her ‘hey do not look at the camera’.

“Suddenly, I saw like eight people including Princess, entered the room and started beating the girl.

“I even thought it was part of acting. She beat her and said ‘idiot is that what I asked you to do’. One of the men gave me a blow and alleged that I raped the girl,” he said.

The defendant further told the court that he was shocked when he was being beaten and thought that the men who meted out the beating were amateur actors because they are not meant to use actual physical violence in movie scenes.

Baba Ijesha said that he was forced in one of the viral videos by Princess to admit that he defiled the minor.

“Princess said “you know I love you, just tell me that seven years ago you used your car key to disvirgin the girl” that she would allow me to go if I said so.

“I had to accept under pressure so that the men would not injure me the more, after Princess invited one police officer named Abigail, before I was taken to Sabo Police Station after,” he told the court.

The defendant said he was forced to sign a statement which was not written by him at the police station.

“Immediately, Abigail asked me to sign and I did just that, she took me back to the cell and I stayed there till the following morning,” he said.

Under cross-examination by the Lagos State Director of Public Prosecutions, Dr Babajide Martins, the defendant admitted to have known the girl since she was seven.

He added that he did not inform the Police at Sabo and Panti, respectively that they were acting.

READ:  "Never Turn Your Backs On Each Other Again" - Lola Omotayo Tells Psquare On Their 41st Birthday

Probing Baba Ijesha further, Martins said: “While you were being beaten, you said you thought that they were amateur actors because of the actual violence. Since you said it was a movie script, so you are not meant to mimic sexual assault on an underage child?”

Baba Ijesha in his response said the scenes he acted with the minor were appropriate.

After his testimony and cross-examination, Justice Oluwatoyin Taiwo adjourned the case until March 11 for continuation of defence.

KanyiDaily recalls that during the previous trial, a witness who is experienced in video production as well as CCTV installation and maintenance, Lawrence Ayeni said that the CCTV footage used as evidence against Baba Ijesha was edited.

“Leave Me Alone, Being Second Wife Is My Choice And I’m Happy” – Mercy Aigbe Tells Critics