Abiodun Oyebanji, a former Secretary to the State Government (SSG), has been sworn in as the new governor of Ekiti state.

He was sworn in by the Chief Judge of Ekiti State, Hon. Justice Oyewole Adeyeye at exactly 12:53 pm amid cheers from the mammoth crowd present at the Ekiti Parapo Pavilion on Sunday.

Clad in white agbada with a cream cap to match, he pledged to preserve, protect and defend as well as preserve the office as governor.

Oyebanji’s deputy, Chief (Mrs) Monisade Afuye was also sworn in by the Chief Judge of Ekiti State. She took her oath of office at exactly 12:46 pm.

The immediate past Ekiti State Governor, Kayode Fayemi, his predecessor, Ayodele Fayose; Osun State Governor, Gboyega Oyetola were also at the Ekiti Parapo Pavillion, the venue for the inauguration.

KanyiDaily recalls that Biodun Oyebanji, who was the candidate of the All Progressives Congress (APC), was declared winner of the Ekiti governorship election after defeating Segun Oni of the Social Democratic Party (SDP) and Bisi Kolawole of the Peoples Democratic Party (PDP). 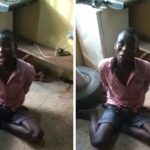