The Economic and Financial Crimes Commission (EFCC) says its operatives have arrested the duo of Onochie Kaykay Mokwenye and Abdullahi Adamu, alleged members of a ruthless syndicate of land racketeers terrorising prospective property owners in Abuja. 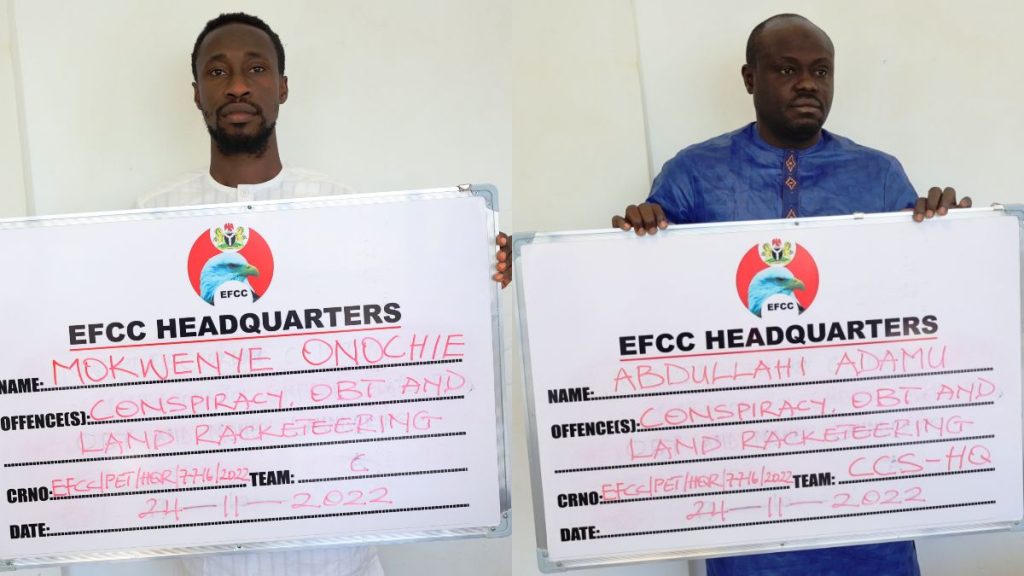 This was contained in a statement issued on Friday by the Spokesman of EFCC, Wilson Uwujaren.

Uwujaren said the duo was arrested on Thursday, November 24, 2022.

According to him, their arrest was based on verified intelligence linking them to several land frauds, where victims were dispossessed of their hard-earned money in land transactions, using fake documents.

“One of their victims narrated how the suspects sold a land for N5m and later resold it to two others with fake documents,” the EFCC statement reads briefly.

“One of the victims had allegedly spent N45m on the property before it was reclaimed by the genuine owner and demolished.

“Suspects will be arraigned in court as soon as the investigation is concluded.”

In other news, Kanyi Daily reported how a coup attempt in Sao Tome and Principe was foiled on Friday morning.

Bandits Kill 15 Farmers, Injures Others For Refusing To Pay ‘Harvest Levies’ In Kaduna

Man Remanded In Prison For Rαping His Girlfriend Daughter, Infecting Her With HIV In Delta