Shops and goods worth millions of Niara were on Saturday destroyed in an early morning fire in Ose main market, Onitsha, Anambra State. 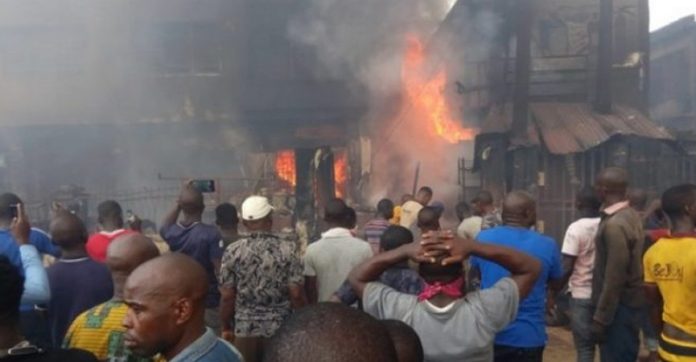 It was gathered that the fire, which started around 1 am, gutted three shops where drums of chemicals were sold before firefighters prevented the inferno from spreading to other sections of the market.

The State Fire Chief, Engr Martin Agbili, who confirmed the incident, said that no life was lost in the inferno, while the cause of the fire was still unknown as at the time of filing the report.

He said: “At about 0102hrs (1.02am) of today Saturday 10-12-2022, Anambra State Fire Service, received a distress call of fire outbreak at No 4 Ajasa Street, OSE Main Market, Onitsha, where they sell drums of chemical.

“Immediately, we deployed our fire truck and our ever ready and fearless Firefighters to the fire scene. We swift into action, battled the fire, controlled and fought is to standstill.

READ:  "Cooperate With Kidnappers When Abducted For Your Safety" - Police Tell Nigerians

“The cause of the fire was unknown as nobody was there when it started. Although, the fire destroyed about three (3) shops but no life was lost during the heavy fire.

“A lot were saved as we prevented the fire from spreading to other shops around the fire incident scene.

“It is important to know that we must always switch off of our electrical and electronic appliances especially when it is not in use.

“We must also know that we are at the peak of the harmattan. Avoid anything which can cause fire outbreak at this season.”

This comes three weeks after a section of the popular main market in Onitsha was gutted by fire.

Shehu Sani To Buhari: Count, Record Number Of Those Who Will Wish You Happy Birthday Next Year