Cristiano Ronaldo has exited the World Cup in tears after Morocco defeated Portugal 1-0 in the quarter-final to become the first African team to reach the World Cup semifinals. 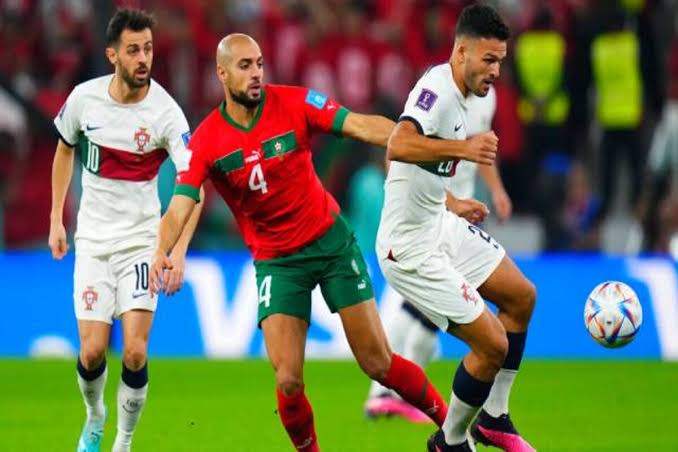 During the match on Saturday, Youssef En-Nesyri scored the decisive goal in the 42nd minute, directing a header to the top right corner, assisted by Yahya Attiat-Allah’s cross.

Despite dominating possession and creating more chances, Portugal could not find the back of the net against a Moroccan team whose defense has suffocated opponents throughout its magical run.

Portugal played Ronaldo from the bench for the second straight match, and had ample opportunities to equalize throughout both halves.

João Félix created space for a 39th-minute shot that went wide of the post. Six minutes later, Bruno Fernandes nearly scored but instead struck the post.

Ronaldo, a 51st minute sub, separated from a pair of Moroccan players and drove his 91st-minute shot toward goal, but he couldn’t beat a scrambling Yassine Bounou, who subdued the threat.

READ:  Spartak Moscow Raises Alarm After Victor Moses Failed To Report To The Club In Weeks

Morocco went down to 10 men in the second half’s stoppage time, as Walid Cheddira received two yellow cards in a space of just two minutes, and ejected during the 93rd.

And at the final whistle Ronaldo was one of the first players to leave the pitch, being filmed in tears as he walked down the tunnel and into the dressing room.

With Morocco sealing qualification to the semi-finals, where they will face the winner of the duel between France and England.

Morocco have surpassed the three other African sides to reach the quarter-finals — Cameroon in 1990, Senegal in 2002 and Ghana in 2010.

KanyiDaily had also reported how Croatia stunned five-time world champions Brazil with a dramatic 4-2 penalty shootout win to book a place in the World Cup semi-finals.