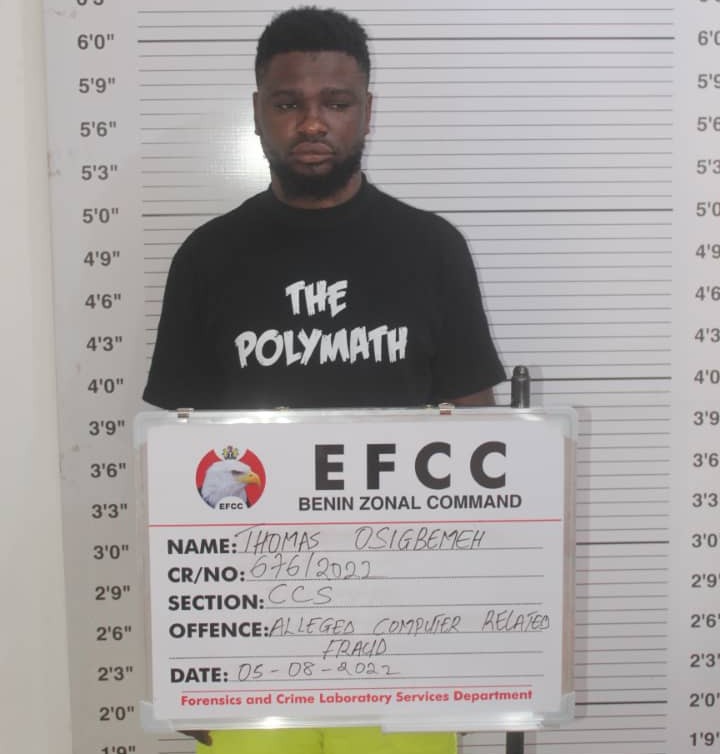 His conviction was secured by the Benin Zonal command of the Economic and Financial Crimes Commission, EFCC, on Wednesday, December 21, 2022, after he was arraigned on one count charge of personation by the commission.

This was disclosed in a statement issued on Thursday by the Spokesman of the EFCC, Wilson Uwujaren.

The charge against him reads: “that you, Thomas Osigbemeh sometime between 2019 to 2020 within the jurisdiction of this Honourable Court did with intent to defraud represent yourself to be Jichag Wook, a verified and legitimate Bitcoin Trader and thereby committed an offence contrary to and punishable under Section 484 of the Criminal Code Law Cap 48 Laws of Bendel State of Nigeria (As applicable in Edo State) 1976

Upon arraignment, the defendant pleaded guilty to the charge.

READ:  Jealous Gay Man Arrested For Stabbing Lover Who Cheated On Him With Woman

Given his plea, the prosecution counsel, I.K. Agwai prayed to the court to convict and sentence the defendant accordingly. However, counsel to the defendant pleaded with the court to temper justice with mercy as the client was a first-time offender who have become remorseful for his action.

Justice Ikponmwonba convicted and sentenced Osigbemeh to three years imprisonment with an option of One Hundred Thousand Naira as a fine.

In addition, Osigbemeh is to forfeit one Lexus ES 350; a Lexus RX350, two Laptops, and one iPhone 7 to the Federal Government of Nigeria. He is also to forfeit the sum of N72, 885.63 found in  his First Bank  account and the balance of N 6,926.50 in the United Bank for Africa account  to the Federal Government of Nigeria  through the EFCC, while the bank accounts are to be closed

In the same vein, the Benin Command on Tuesday, December 20, 2022, arraigned one Opeyemi Michael Adeyemi before Justice Ikponwonba for obtaining by false pretence.

Adeyemi is alleged to have defrauded one Mohammed Abubakar of $520USD under the pretence of booking an apartment in London.

READ:  Woman Accused Of Leaving Her Husband To Marry Pastor Shares Her Own Story [Video]

The charge against reads: “That you, OPEYEMI MICHAEL ADEYEMI Sometime in November 2022 within the jurisdiction of this Honourable Court, with intent to defraud, did induce one Mohammed Abubakar to obtain the sum of $520, (Five Hundred and Twenty Dollars) equivalent to N290,000 for booking of an apartment in London which was transferred to your United Bank for Africa account number 2175103342, a representation which you knew to be false and thereby committed an offence contrary to Section 1(1) (b) of the Advance Fee Fraud and Other Fraud Related Offences Act, 2006 and punishable under Section 1(3) of the same Act.”

Upon arraignment, the defendant pleaded not guilty to the charge and was granted bail in the sum of One Million Naira and a surety in like sum.

In other news, Kanyi Daily reported that the president of the African Development Bank (AfDB), Akinwumi Adesina lost his mother, Eunice Adesina at the age of 92.

Adesina, who announced this in a tweet on his official Twitter handle on Thursday evening, said she passed away today.